SAN FRANCISCO (AP) — Federal prosecutors charged Texas billionaire Robert Brockman on Thursday with a $2 billion tax fraud scheme in what they say is the largest such case against an American. 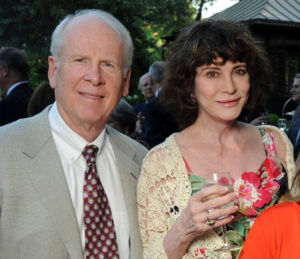 Robert and Dorothy Brockman attend an intimate al fresco dinner celebrating the Rice University groundbreaking of James Turrell’s Rice University Skyspace project at the home of Phoebe and Bobby Tudor, Tuesday evening, May 17, 2011, in Houston. Federal prosecutors have charged Texas billionaire Robert Brockman in a $2 billion tax fraud scheme that they say is the largest such case against an American. (Dave Rossman/Houston Chronicle via AP)

Department of Justice officials said at a news conference that Brockman, 79, hid capital gains income over 20 years through a web of offshore entities in Bermuda and Nevis and secret bank accounts in Bermuda and Switzerland. Prosecutors announced that the CEO of a private equity firm that aided in the schemes would cooperate with the investigation.

Prosecutors also announced that Robert F. Smith, founder and chairman of Vista Equity Partners, will cooperate in the investigation and pay $139 million to settle his own tax probe. Smith, 57, stunned a senior class last year when he promised to wipe out the student loan debt of the entire graduating class at Morehouse, a historically Black all-male college. 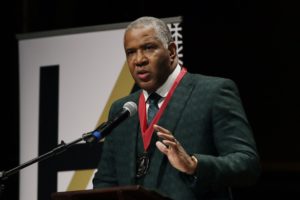 “Complexity will not hide crime from law enforcement. Sophistication is not a defense to federal criminal charges,” said David L. Anderson, U.S. attorney for the Northern District of California. “We will not hesitate to prosecute the smartest guys in the room.”

Brockman appeared in federal court from Houston via Zoom Thursday. He entered a plea of not guilty to all counts and was released on $1 million bond, said Abraham Simmons, spokesman for the Northern District of California.

“Mr. Brockman has pled not guilty, and we look forward to defending him against these charges,” said his attorney, Kathryn Keneally, in an email.

Prosecutors said Brockman used encrypted emails with code names, including Permit, Snapper, Redfish and Steelhead, to carry out the fraud and ordered evidence to be manipulated or destroyed.

Brockman, a resident of Houston and Pitkin County, Colorado, is chairman and CEO of Reynolds and Reynolds, a 4,300-employee company near Dayton, Ohio, that sells accounting, sales and management software to auto dealerships. The software helps set up websites, including live chats with potential customers, find loans and calculate customer payments, manage payroll and pay bills.

Reynolds & Reynolds issued a statement saying the allegations were outside Brockman’s work with the company and that the company is not alleged to have participated in any wrongdoing.

In 2013, a charitable trust set up by Brockman’s late father withdrew a pledged $250 million donation to Centre College, a small liberal arts school in Danville, Kentucky, where Brockman attended class and once served as chairman of the board of trustees.

At the time the school said it was due to a “significant capital market event” that didn’t pan out. A spokesman for Reynolds and Reynolds said in 2013 that the event was a proposed refinancing deal involving Vista Equity Partners, Smith’s company.

According to the indictment, Brockman gave an unnamed individual detailed instructions regarding the proposed gift to the college, including talking points, and directed the person to threaten to pull out if his demands were not met. In August, he instructed the person to cancel the gift.

Prosecutors say that Smith used about $2.5 million in untaxed funds to buy and upgrade a vacation home in Sonoma, California; purchase two ski properties in France; and spend $13 million to buy a property and fund charitable activities at his property in Colorado.

Anderson applauded Smith for stepping up, despite the serious nature of his crimes, which occurred from 2000 to mid-2015. 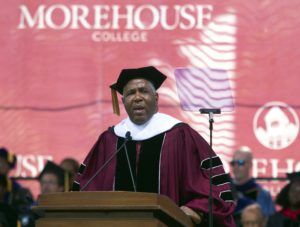 FILE – In this May 19, 2019, file photo, billionaire technology investor and philanthropist Robert F. Smith announces he will provide grants to wipe out the student debt of the entire 2019 graduating class at Morehouse College in Atlanta. DOJ charges Houston billionaire Robert Brockman, not seen, with $2 billion tax fraud in largest such fraud case against an American. Prosecutors also announced Thursday, Oct. 15, 2020, that Robert Smith, founder and chairman of investment firm Vista Equity Partners, will cooperate in the investigation and pay $139 million to settle a tax probe. (Steve Schaefer/Atlanta Journal-Constitution via AP, File)

“Smith’s agreement to cooperate has put him on a path away from indictment,” he said.

In 2019, Smith announced to the graduating class at Morehouse College that he would pay off the student loan debt of the entire class, saying that he expected the graduates to “pay it forward.” The estimated cost was $40 million.

Forbes lists Smith as #461 on its billionaires list, with a net worth of more than $5 billion.

He founded the tech investment firm Vista in 2000 and Forbes reports that it now has over $50 billion in assets and is “one of the best-performing private equity firms, posting annualized returns of 22% since inception.” Vista has offices in San Francisco and Oakland.

Vista did not immediately respond to a request for comment.