CYPRESS, Texas (AP) — A mother whose twin teenagers told police in Texas they were handcuffed and forced to drink bleach was in jail Friday in neighboring Louisiana, where records show the woman had pleaded guilty a decade earlier to charges of putting her kids in danger.

Zaikiya Duncan, 40, was arrested in Louisiana this week after doorbell videos showed the 15-year-old siblings, barefoot and holding handcuffs, knocking on homes before dawn in their suburban Houston neighborhood and asking for help. Duncan’s live-in boyfriend also was arrested. 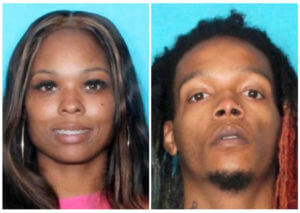 This combo of images provided by the Harris County Sheriff’s Department shows, from left, Zaikiya Duncan, 40, left, and Jova Terrell, 27, who were arrested in Louisiana this week hours after a teenager told Texas police that he and his twin sister were handcuffed and endured horrific abuse escaped their family’s home after he found a handcuff key and hid it in his mouth, authorities said in court records. (Harris County Sheriff’s Department via AP)

Both were in jail in Baton Rouge, about 250 miles (400 kilometers) east of Houston, awaiting extradition on charges of aggravated assault, according to authorities. It was not clear Friday whether either had an attorney.

The brother and sister were severely malnourished and told police that abuse had been occurring for months, according to affidavit from a Harris County constable in Houston. They told authorities that Duncan handcuffed them, forced them to drink bleach and other household cleaners, and sprayed oven cleaner in their mouths “if they talked too much,” the affidavit said.

Both had lacerations on their wrist and escaped Tuesday after the brother found a key to the handcuffs and hid it in his mouth, according to the affidavit.

“She was shaking with her handcuffs,” a neighbor who let the children inside their home told Houston television KTRK. The woman did not allow her name to be used or show her face on camera while speaking to the station.

“She was like, ‘We are looking for help. We just need help. We just broke out of our handcuffs. Our mom had us handcuffed in the laundry room.’”

The siblings had knocked on other doors seeking help that morning, a Harris County constable told KTRK.

The woman who let the siblings into her home lives about a half-mile (less than a kilometer) from the twins’ address, in a subdivision with brick homes and manicured lawns.

Duncan was arrested hours later in Louisiana after police issued a missing children alert for five other children. All seven children, including the twins, are now in the custody of child welfare officials, authorities said. The Texas Department of Family and Protective Services has no previous incidents involving the family, spokesman Patrick Crimmins said.

In 2012 in Louisiana, Duncan and another man were accused of locking their children in a closet while other kids were subjected to various abuses. One of her children, then 5, was taken to a school clinic with injuries that included burns consistent with being submerged in hot water, according to court records. It was not immediately known whether that child was one of the twins.

Catherine Soileau Heitman, a spokeswoman for the Louisiana Department of Children and Family Services, said under state law the agency cannot comment on or acknowledge a child abuse investigation.

Duncan was initially charged with cruelty to a juvenile but ultimately pleaded guilty to the lesser charge of child desertion. She was sentenced to six months in prison, the maximum sentence for child desertion under Louisiana law.

Her live-in boyfriend, 27-year-old Jova Terrell, also faces an assault charge related to the Houston case. KTRK reported they were expected to be extradited within 30 days.