SAN JOSE, Calif. (AP) — Although she wasn’t in the courtroom, Theranos CEO Elizabeth Holmes loomed over the opening day of a trial that will determine whether her jilted lover and former business partner Ramesh “Sunny” Balwani was also her partner in crime.

In opening statements Tuesday, a federal prosecutor depicted Balwani as an instrumental accomplice who helped Holmes pull off a huge scam tied to Theranos’ blood-testing technology. 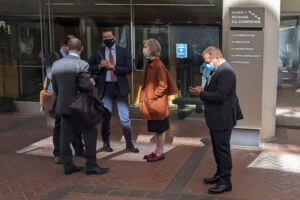 FILE – Former Theranos executive Ramesh “Sunny” Balwani, right, stands near his legal team outside Robert F. Peckham U.S. Courthouse in San Jose, Calif., on March 1, 2022. Although she wasn’t in the courtroom, Tuesday, March 22, 2022, Theranos CEO Elizabeth Holmes loomed over the opening day of a trial that will determine whether her jilted lover and former business partner, Balwani, was also her partner in crime. (AP Photo/Michael Liedtke, File)

Balwani’s lawyer countered by casting Balwani as a savvy and well-meaning executive who poured millions of his own dollars into Theranos because he so fervently believed the Silicon Valley company would revolutionize health care.

Balwani’s trial began 2 1/2 months after another jury found Holmes guilty on four counts of investor fraud while acquitting her on four other charges accusing her of duping patients about the effectiveness of Theranos’ blood tests. The latest trial was supposed to start last week, but got postponed because someone in the court room had been exposed to COVID-19.

Although Balwani is getting a separate trial on similar criminal charges, it quickly became clear Holmes’ specter is likely to loom in the background.

Holmes’ name came up repeatedly during federal prosecutor Robert Leach’s roughly 50-minute opening statement to the jury, as did her picture on screens placed around the courtroom, including displays in front of Balwani.

“You will see how they were partners in everything, including their crimes,” Leach said of the romantic and business alliance between Holmes, now 38, and Balwani, 57.

Balwani’s lawyer, Stephen Cazares, also made multiple references to Holmes during his 90-minute presentation, but mostly in ways meant to cast Balwani as an already successful entrepreneur who left the company in better shape than when he joined it while providing a desperately needed infusion of cash.

Although Balwani became romantically involved with Holmes around the same time she founded Theranos after dropping out of Stanford University in 2003, Cazares emphasized Balwani didn’t begin working at the company until 2009. At that point, Cazares said Balwani he put up $10 million of his own money to guarantee a loan for Theranos before investing another $5 million to buy a stake in the company.

That stake eventually became worth $500 million on paper.

“Sunny believed in Theranos, its technology and its mission,” said Cazares, a former federal prosecutor.

In 2010, Balwani became Theranos’ chief operating officer, a job he held until May 2016 when Holmes dumped him amid revelations about serious flaws in a technology that they had boasted could to scan for hundreds of potential health problems with just few drops of blood.

Those audacious — and ultimately bogus — claims helped Theranos raise nearly $1 billion and strike lucrative deals with Walgreens and Safeway before it all unraveled and the company collapse.

Before Theranos downfall, Holmes was being celebrated as a visionary who was sitting on a personal fortune of $4.5 billion — nine times more than Balwani’s stake in the company.

While Cazares told the jury Balwani got the job at Theranos the because of his past successes, Leach sought to portray him as someone unqualified to be overseeing a company attempting to develop a medical device.

“What he did have is a connection to Elizabeth Holmes,” Leach said of Balwani.

The close relationship between Holmes and Balwani came up frequently during Holmes’ trial too, including text messages between the two former lovers. Leach indicated some of those same texts will be submitted as evidence during Balwani’s trial. He also telegraphed that many of the same witnesses called to testify against Holmes are likely to resurface in these proceedings.

Holmes’ trial also included a dramatic afternoon when she tearfully accused Balwani of being a sometimes domineering figure in her life who subjected her to emotional and sexual abuse. One of Balwani’s other attorneys vehemently denied those allegations during Holmes’ trial and Cazares urged jury members in the current trial to discard anything they may have recalled reading or hearing about them.

“The headlines and sensational stories about Elizabeth Holmes have no place in this trial,” Cazares said.

Holmes faces up to 20 years in prison, but is free on $500,000 bail while awaiting her sentencing scheduled for September. That has raised speculation that Holmes might agree to testify against Balwani in exchange for a recommendation of leniency, although that is considered a remote possibility.

Without an appearance by Holmes, Balwani’s trial seems unlikely to attract the intense attention of her trial, which lasted from last September to her January conviction. That was evident early Tuesday, with only a few people lined up to get into the courthouse about an hour before it opened. That was in stark contrast to Holmes’ trial, which attracted queues of people lining up more than five hours before the San Jose, California, courthouse opened.

Balwani’s trial is expected to run for the next three months.