SAN JOSE, Calif. (AP) — A jury has ended the suspense surrounding the fraud trial of former Theranos CEO Elizabeth Holmes by finding her guilty on four of the 11 charges facing her, but some issues in the legal drama remain unresolved. Here’s a look at some of the most pressing questions.

The general consensus is that Holmes almost certainly will be sent to prison, although it’s difficult to predict for how long. Technically, she could be sentenced to a maximum of 20 years in federal prison for each of the four felony convictions, but experts doubt that will happen. 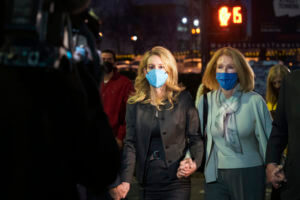 Elizabeth Holmes leaves federal court after the verdict in San Jose, Calif., Monday, Jan. 3, 2022. Holmes was convicted of fraud for turning her blood-testing startup Theranos into a sophisticated sham that duped billionaires and other unwitting investors into backing a seemingly revolutionary company whose medical technology never worked as promised. (AP Photo/Nic Coury)

Former federal prosecutor Neama Rahmani believes Holmes, 37, will be sentenced to at least 10 years in prison unless she can win an appeal to overturn the guilty verdicts. Holmes was convicted for duping Theranos investors and conspiring to commit fraud against them.

An appeal also seems certain, especially because the jury acquitted Holmes on four counts alleging she had also defrauded and conspired against patients who paid for Theranos blood tests that didn’t work as advertised.

“Mixed jury verdicts are definitely the kind of thing you want to bring to an appellate court,” said Matthew Barhoma, a Los Angeles attorney who specializes in appeals. “You want to use that mixed result to say the jury didn’t understand the information presented to them, and there’s an argument to be made that the evidence was insufficient for a conviction.”

Holmes declined to answer questions from reporters after she left court Monday following the verdicts.

U.S. District Judge Edward Davila, who presided over the complex trial in San Jose, California, indicated it will probably be several months before he sentences Holmes. Until then, she will remain free on bail, although she will now likely to have to offer some sort of property or cash as security to discourage from trying to flee.

The freedom will allow her to spend more time with her infant son, who was born shortly before the trial began in September.

Davila is also expected to declare a mistrial on three fraud charges that deadlocked the jury.

Initially, there was relatively little interest in Theranos’ longtime chief operating officer, Ramesh “Sunny” Balwani. Until, that is, Holmes heaped much of the blame for the company’s scandalous downfall on his alleged attempts to control her and his alleged mismanagement of the company’s blood-testing labs.

The trial also cast a bright light on the secret love affair that Holmes and Balwani, now 57, had been having for years, unknown to Theranos’ board of directors and almost everyone else in the company.

At one point in the seven days she spent on the witness stand, Holmes weepily testified that Balwani had subjected her to years of mental, emotional and sexual abuse and suggested it may have clouded her judgment at times. Balwani’s attorney adamantly denied Holmes’ accusations, but Balwani never told his side of the story during the trial.

He will get that chance in his own fraud trial scheduled to start next month.

Interest in Balwani’s trial will intensify if Holmes takes the stand to testify against him. But her attorneys almost certainly won’t allow that in order to protect her likely appeal of her conviction, said Richard Greenfield, a lawyer who represents investors in startups.

While it’s always possible there might be additional civil lawsuits filed against Holmes, there doesn’t seem to be much left for would-be litigants to pursue. Theranos is now worthless, and Holmes reached a civil settlement with the Securities and Exchange Commission even before she was indicted on criminal charges.

In addition to imposing a $500,000 fine on Holmes, the SEC settlement also required her to surrender controlling interest in Theranos. That stake was valued at $4.5 billion in 2014 before a series of revelations about Theranos’ flawed technology caused it all to collapse. Holmes also was barred from becoming an executive or board member of a publicly held company for 10 years.