SAN FRANCISCO (AP) — Elon Musk was depicted Wednesday as either a liar who callously jeopardized the savings of “regular people” or a well-intentioned visionary as attorneys delivered opening statements at a trial focused on a Tesla buyout that never happened.

Lawyers on opposing sides drew the starkly different portraits of Musk for a nine-person jury that will hear the three-week trial, which is focused on two August 2018 tweets that the billionaire posted on the Twitter service that he now owns. 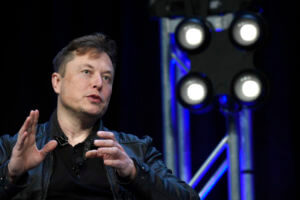 FILE – Tesla and SpaceX Chief Executive Officer Elon Musk speaks at the SATELLITE Conference and Exhibition in Washington. A federal judge on Friday, Jan. 13 2023 rejected Tesla CEO Elon Musk’s bid to move or delay a trial over a misleading tweet about a potential buyout of the electric automaker, setting the stage for the mercurial billionaire to be thrust into a legal drama amid the turmoil of his Twitter takeover. (AP Photo/Susan Walsh, File)

The tweets indicated that Musk had lined up the financing to take Tesla private at a time when the automaker’s stock was slumping amid production problems.

The prospect of what would have been a $72 billion buyout fueled a rally in the company’s stock price that abruptly ended a week later after it became apparent that he did not have the funding to pull off the deal after all. Tesla shareholders then sued him, saying that Tesla shares would not have swung so widely in value if he had not dangled the prospect of buying the company for $420 per share.

Nicholas Porritt, a lawyer representing Glen Littleton and other Tesla shareholders in the class-action case, promptly vilified Musk as he addressed jurors.

“Why are we here?” Porritt asked. “We are here because Elon Musk, chairman and chief executive of Tesla, lied. His lies caused regular people like Glen Littleton to lose millions and millions of dollars.” He also asserted that Musk’s tweet also hurt pension funds and other organizations that owned Tesla stock at the time.

Musk’s lawyer, Alex Spiro, countered that the run-up in Tesla’s stock after the tweet mostly reflected investors’ belief in Musk’s ability to pull off stunning feats, including building the world’s largest electric automaker while also running SpaceX, a maker of rocket ships.

“Mr. Musk tries to do things that have never been done before. Everyone knows that,” Spiro told the jury.

Spiro added that Musk had been in advanced talks with representatives from Saudi Arabia’s Public Investment Fund to take Tesla private.

“He didn’t plan to tweet this,” Spiro said of Musk’s Aug. 7, 2018, statement at the heart of the trial. “It was a split-second decision” aimed at being as transparent as possible about the discussions with the Saudi fund about a potential deal.

After saying “funding secured” for the buyout, Musk then followed up with another tweet that suggested a deal was imminent.

Musk’s tweets attracted the attention of securities regulators, who concluded that they were improper and that he was lying. In a settlement, they forced him to pay $40 million and required him to step down as Tesla chairman. U.S. District Judge Edward Chen, who is presiding over the trial, ruled that the shareholders lawyers can’t mention that settlement in the case.

But Chen has already ruled that Musk’s tweet was false, a finding that can be alluded to during the trial without specifically mentioning the determination made by the judge. Pollitt seized on that opportunity during his opening statement, informing jurors that they are to assume Musk’s tweet was false, as the judge allowed, prompting Spiro to shake his head while sitting at his table.

The trial’s outcome may turn on the jury’s interpretation of Musk’s motive for the tweets. And Musk will have his chance to make his case to the jury. He is on the witness list for both sides of the case, and could appear on the stand before the end of the week.

Musk’s leadership of Twitter — where he has gutted the staff and alienated users and advertisers — has proven unpopular among Tesla’s current stockholders, who are worried that he has been devoting less time to automaker at a time of intensifying competition.

Those concerns contributed to a 65% percent decline in Tesla’s stock last year that wiped out more than $700 billion in shareholder wealth — far more than the $14 billion swing in fortune that occurred between the company’s high and low stock prices from Aug. 7 to Aug. 17, 2018, the period covered in the lawsuit.

After Musk dropped the idea of a Tesla buyout, the company overcame a production problem, resulting in a rapid upturn in car sales that caused its stock to soar and made Musk the world’s richest person until he bought Twitter. Musk dropped from the top spot on the wealth list after a stock market backlash to his handling of Twitter.

The trial is likely to provide insights into Musk’s management style, given that the witness list includes some of Tesla’s current and former top executives and board members, including luminaries such as Oracle co-founder Larry Ellison and James Murdoch, the son of media mogul Rupert Murdoch.

The drama may shed light on Musk’s relationship with his brother, Kimbal, who is also on the list of potential witnesses. The trial is expected to last until early February.