JACKSON, Miss. (AP) — Relatives of Emmett Till joined with supporters Friday in asking authorities to reverse their decision to close an investigation of his 1955 lynching and instead prosecute a white woman at the center of the case from the very beginning.

Authorities have known for decades that Carolyn Bryant Donham, now in her 80s and living in North Carolina, played a key role in Till’s slaying, and they need to act immediately to bring her to justice before time runs out, said Deborah Watts, a cousin of Till. 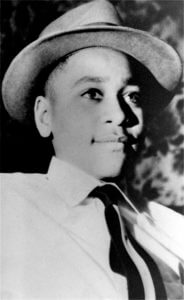 FILE – An undated portrait shows Emmett Till. The 14-year-old from Chicago was visiting relatives in Mississippi in August 1955 when he was kidnapped, tortured and killed after witnesses heard him whistle at a white woman. Till’s mother insisted on an open-casket funeral, and Jet magazine published photos of his brutalized body. Those images galvanized the civil rights movement. On Feb. 28, 2022, a Mississippi county approved contracts for a bronze statue of Till that will be put in a park. (AP Photo/File)

“Time is not on our side,” Watts, who lives in Minnesota and heads the Emmett Till Legacy Foundation, said during a news conference that included a saxophone serenade of an old civil rights anthem at the Mississippi Capitol.

Relatives said they would present Mississippi authorities with a petition signed by about 250,000 people seeking a renewed probe of the killing, which came to demonstrate the depth of racial hatred in the South to the world. Other petition drives continue.

Michelle Williams, chief of staff for Mississippi Attorney General Lynn Fitch, cast doubt on the possibility of a renewed investigation. In a statement, she said the Justice Department had worked with a local district attorney’s office in a re-examination that ended in December.

“This is a tragic and horrible crime, but the FBI, which has far greater resources than our office, has investigated this matter twice and determined that there is nothing more to prosecute,” Williams said.

The Justice Department announced in December it was ending its renewed investigation into the killing of Till, a Black 14-year-old from Chicago who was abducted, tortured and killed after witnesses said he whistled at Donham, then known as Carolyn Bryant, at a family store where she worked in rural Mississippi.

Federal officials had reopened the investigation after a 2017 book quoted Donham as saying she lied when she claimed Till accosted her. Relatives have publicly denied that Donham recanted her allegations, and Donham told the FBI she had never changed her story, the Justice Department said. 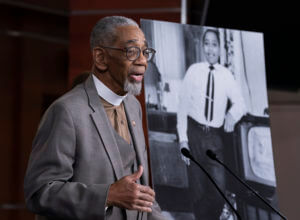 FILE – Rep. Bobby Rush, D-Ill., speaks during a news conference about the “Emmett Till Anti-Lynching Act” on Capitol Hill in Washington, on Feb. 26, 2020. Emmett Till, pictured at right, was a 14-year-old African-American who was lynched in Mississippi in 1955, after being accused of offending a white woman in her family’s grocery store. Congress has given final approval to legislation that for the first time would make lynching a federal hate crime in the U.S. (AP Photo/J. Scott Applewhite, File)

The Justice Department also said that historian Timothy B. Tyson, author of “The Blood of Emmett Till,” was unable to produce recordings or transcripts to substantiate his account of Donham allegedly admitting to lying about her encounter with the teen.

The FBI investigation included a talk with one of Till’s cousins, the Rev. Wheeler Parker Jr., who previously told the AP in an interview that he heard Till whistle at the woman in a store in Money, but the teen did nothing to warrant being killed.

Donham’s then-husband, Roy Bryant, and his half-brother J.W. Milam, were tried on murder charges about a month after Till was killed, but an all-white Mississippi jury acquitted them. Months later, they confessed in a paid interview with Look magazine.

The Justice Department found that Bryant and Milam weren’t the only people involved, however, and estimates on the number of people who might have played a role in Till’s killing range from from a half-dozen to more than 14.

Earlier this week, Congress gave final approval to legislation that for the first time would make lynching a federal hate crime in the United States, sending the bill to President Joe Biden. Years in the making, the Emmett Till Anti-Lynching Act is among some 200 bills that have been introduced over the past century that have tried to ban lynching in America.
___
Reeves reported from Birmingham, Alabama.