Pate, 55, was on St. Simons Island, about 300 miles south of Atlanta, when he was swept out to sea by a rip current off Gould’s Inlet. Pate jumped in the water to help his teenage son, who was struggling in the strong tide. The teen made it safely to shore, but his dad did not. 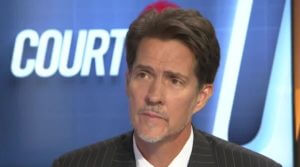 According to The Brunswick News, the Glynn County Fire-Rescue squad pulled Pate out of the water and attempted CPR before transporting him to Brunswick Hospital where he was pronounced dead.

Pate worked as an attorney for almost 30 years. He worked for multiple Atlanta-area law firms before starting his own firm, Pate, Johnson & Church, where he served as a senior trial attorney.

His firm released the following statement:

“Page Pate was many things to many people—a husband, a father, a son, a mentor, a colleague, a friend, and most prominently, a trial lawyer, one who poured himself into his practice and fought hard for his clients. Above all, he was a true gentleman who embodied service and grace.

Some of the best things about Page won’t be in the news but will live on in the memories of the people whose lives he touched. Though he was a formidable, sometimes intimidating, attorney in the courtroom, Page had an easy smile, an earnest laugh, and a great sense of humor. He was guided by his faith and his creator, but he had an open heart and an open mind to all. Page’s passing is an enormous loss to his family, his friends, his community, and the entire legal profession. He will be deeply missed.”

In addition to his illustrious law career, Pate was instrumental in founding the Georgia Innocence Project, a non-profit that assists wrongfully convicted individuals. In addition to lending his expertise to Court TV, he was a legal analyst for many other news outlets including CNN, Atlanta’s 11Alive, Georgia Public Broadcasting, and others.

Pate was a lifelong Georgia resident who graduated from Georgia State University and the University of Georgia School of Law. He leaves behind his wife, Elizabeth, teenage sons Chatham and Asher, parents Robert and Mary Elizabeth, and a younger brother, Lane.

Deeply saddened by the loss of @pagepate, a true icon of #Georgia #CriminalJustice.

May his memory be a blessing, we have all lost a hero of the Constitution. https://t.co/I7B4jeEUsI