NEW YORK (AP) — Epic Ponzi scheme mastermind Bernard Madoff is dead. But the effort to untangle his web of deceit lives on.

More than 12 years after Madoff confessed to running one of the biggest financial fraud in Wall Street history, a team of lawyers is still at work on a sprawling effort to recover money for the thousands of victims of his scam. 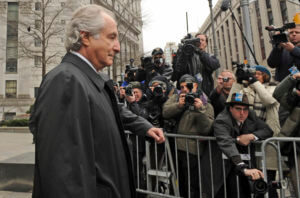 FILE – Bernard Madoff exits Manhattan federal court, Tuesday, March 10, 2009, in New York. The epic Ponzi scheme mastermind is dead. But the effort to untangle his web of deceit lives on. More than 12 years after Madoff confessed to running the biggest financial fraud in Wall Street history, a team of lawyers is still at work on a sprawling effort to recover money for the thousands of victims of his scam.(AP Photo/ Louis Lanzano, File)

Their labors, which have already secured $14.5 billion of the estimated $17.5 billion investors put into Madoff’s sham investment business, didn’t cease with the financier’s death in prison in April.

Ongoing litigation by Irving Picard, a court-appointed trustee for the liquidation of Bernard L. Madoff Investment Securities, and his chief counsel, David Sheehan, could potentially pull in billions of dollars more.

“You don’t like to see anyone die. But in this case, it wasn’t going to have any impact on what we’re doing,” Picard told The Associated Press. “Our work goes on.”

The painstaking process of trying to unwind Madoff’s fraud began not long after the money manager’s arrest in December 2008.

His downfall came as a result of a national financial crisis in which banks that had made reckless bets on mortgage-backed securities collapsed and investors scrambled to pull money out of the stock market.

Spooked investors started making withdrawals from Madoff’s investment fund, too, but he ran out of money to give them. While his books said his fund was worth $60 billion, most of that money didn’t exist. He’d never actually invested the cash clients gave him.

When clients cashed out fictitious profits, Madoff simply stole from other clients to cover withdrawals.

Picard was given the task of separating the “net losers” — Madoff clients who didn’t cash out of their accounts — from those who did.

Over time, net losers with approved claims have quietly seen an average of 70% of their investments returned. Net winners were subjected to so-called “clawbacks.” Not only did they lose money they thought they had in their accounts, they had to pay back profits they had withdrawn over the years.

“Those people felt as though, and rightfully so, that they had been damaged twice — first by Madoff and then by this trustee saying ‘give me your profit,’” Sheehan said.

The process was difficult for everyone. Some Madoff investors had retired early. Some had bought nice homes in expensive locales. Some had made large charitable donations, confident their nest egg was secure. 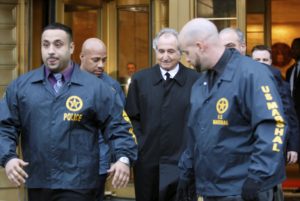 FILE – Disgraced financier Bernard Madoff, center, leaves U.S. District Court in Manhattan escorted by U.S. Marshals after a bail hearing in New York, Monday, Jan. 5, 2009. More than 12 years after Madoff confessed to running the biggest financial fraud in Wall Street history, a team of lawyers is still at work on a sprawling effort to recover money for the thousands of victims of his scam. (AP Photo/Kathy Willens, File)

Gordon Bennett, thinking his account with Madoff was worth $3 million, did heavy renovations on a home in Marin County north of San Francisco.

When he learned Madoff was arrested, he told his wife, “Kate, we just lost the house.”

The financial shock worsened months later when he learned that 25 years of annual withdrawals of up to 10% meant he’d taken out more than he’d put in.

Picard’s collectors wanted his profits. Suddenly, Bennett was in danger of being added to the bucket of wealthy individuals and institutions the trustee was suing, claiming they knew or should have known their returns were fraudulent.

“That was quite scary,” he said. “We eventually worked out an arrangement with the trustee and we sent him all our documents and said: ‘Look, you know, we don’t have any money.’ So he eventually said: ‘OK, I’ll go after bigger fish.’”

And Picard did, with some help from federal prosecutors. The biggest single chunk came in late 2010 when the widow of a Florida philanthropist agreed to return a staggering $7.2 billion that her husband, businessman Jeffry Picower, had pocketed. Months later, another $1 billion was secured from one of the many feeder funds that the trustee accused of ignoring red flags about Madoff.

These days, Bennett, 74, finds solace in the same home after a friend bought it and rented it back to him.

Some victims contacted by The AP said that the news that Madoff had died at age 83 while serving a 150-year prison term served only as a sad reminder of crimes that altered their lives.

Richard Shapiro, 68, of Hidden Hills, California, said he lost a “very significant” amount of his net worth. In a panic, he briefly put his house up for sale and un-retired to earn money again as a commercial real estate development manager.

Picard’s quick success at recovering some money spawned a mini-industry of firms offering Madoff victims immediate cash in return for their rights to whatever the trustee recovered.

Shapiro pounced on that opportunity, selling one of his Madoff funds for much less than it was worth, and another for closer to what Picard might eventually fetch, enabling him to save his home and start rebuilding his life.

“I do have my life back together now,” he said. “And I’m sure that’s the case with every Madoff victim. I don’t think anybody walked away from it unscathed.”

“I was kind of angry at the trustee,” said Gervitz, an engineer from Detroit. “He didn’t even try to come up with a more reasonable settlement.”

Still, Gervitz found a larger lesson to the pain: “You don’t get something for no nothing. Basically, if it’s too good to be true, it is.”

LOOKING BACK AND AHEAD

Picard and Sheehan carry their own memories of the Madoff saga. Sheehan recalled how there was one person who didn’t offer any help over the years: a delusional Madoff.

“He actually would complain to me that the people who got the false profits were making money, so why were they complaining? He was doing them a favor,” Sheehan said in describing his interactions with the disgraced financier, including prison visits. “It was stolen money. It wasn’t much of a favor.”

Then there was the artwork recovered from Madoff’s office and sold at auction, including an infamous 4-foot sculpture depicting a screw — titled “The Soft Screw” — and bull lithographs by Roy Lichtenstein. All brought in more cash through auctions.

“There were lots of assets we could sell that you wouldn’t find in the typical case,” Picard said. “Here they had other people’s money to spend, and they did.”

Asked whether the recovery effort was winding down, the lawyers predicted it will go on at least another two to three years — something they’ve been saying for a decade.

The trustee still has the financial backing of the non-profit Securities Investor Protection Corporation (SIPC) to keep global litigation going against the remaining clawback holdouts – including feeder funds and other sophisticated money managers who failed to detect the fraud.

But Picard assured, “Someday it will come to an end.”