MINNEAPOLIS (AP) — Former Minneapolis police officer Thomas Lane, who was sentenced to 2 1/2 years for violating George Floyd’s civil rights, will do his time at a low-security federal prison camp in Colorado.

A court order Tuesday directs Lane to report to the Federal Correctional Institution Englewood in the Denver suburb of Littleton on Aug. 30. 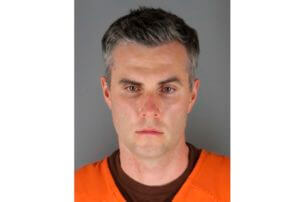 U.S. District Judge Paul Magnuson had recommended that the Bureau of Prisons send Lane to the low-security prison camp in Duluth, closer to his home, but the bureau makes the final decisions on where to place inmates, including weighing safety concerns.

“He should be fine there,” said Lane’s defense attorney, Earl Gray.

According to the Bureau of Prisons website, FCI Englewood is a low-security prison for men with an adjacent minimum security satellite camp. It holds 1,032 inmates, including 97 at the camp. Housing is dormitory or cubicle style. Life there is highly regimented, including frequent head counts and having to wake at dawn.

“They take into account a variety of factors including the offense for which they are sentenced, their criminal history score, recommendation from the judge, prior history of violence, etc.,” Brandt said “I think because this offense wasn’t necessarily a ‘violent’ offense and he had no prior record, his numbers were lower, qualifying him for a lower-security facility.”

Magnuson originally ordered Lane to surrender on Oct. 4, but moved up the date due to the complex interplay between his federal sentence and his sentencing in state court, which is set for Sept. 21, for for his guilty plea to aiding and abetting second-degree murder.

The judge has not so far changed the Oct. 4 surrender dates for former officers Tou Thao and J. Alexander Kueng, who were convicted of federal civil rights charges along with Lane in February. Magnuson sentenced them last month to 3 1/2 years and 3 years, respectively, and recommended that they go to Duluth or Yankton.

But Thao and Keung are scheduled to go on trial in state court Oct. 24 on separate charges of aiding and abetting both murder and manslaughter. They formally rejected plea agreements Monday. 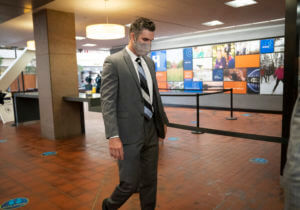 Former police officer Thomas Lane walks through security as he arrived for a hearing at the Hennepin County Government Center in Minneapolis, Minn., on Tuesday, July 21, 2020. (Renee Jones Schneider/Star Tribune via AP)

Legal experts say it’s not unusual for people convicted in federal court to be allowed to report for sentencing weeks or months later, even in a case as emotionally charged as Floyd’s death under the knee of former Officer Derek Chauvin on May 25, 2020, which sparked protests in Minneapolis and around the world in a reckoning over racial injustice and policing.

Chauvin, who was sentenced to 22 1/2 years on state murder and manslaughter charges and 21 years on a federal civil rights charge, remains in the state’s maximum security prison at Oak Park Heights pending his transfer to an as-yet unannounced federal prison.

The Littleton prison has held other former law enforcement officers convicted of federal crimes, including former North Charleston, South Carolina, Officer Michael Slager, who is serving 20 years on a civil rights charge for killing Walter Scott, an unarmed Black man who ran from a traffic stop in 2015; and former Orange County, California, Sheriff Mike Carona, who was sentenced to 5 1/2 years in 2009 for witness tampering.

Other well-known former Englewood inmates have included former Illinois Gov. Rod Blagojevich, who reported in 2012 to serve 14 years for corruption but got his sentenced commuted by then-President Donald Trump in 2020. Another was former Enron CEO Jeffrey Skilling, who served more than 12 years in Englewood and elsewhere starting in 2006 for securities fraud and other crimes.

Still there is former Subway pitchman Jared Fogle, who was sentenced in 2015 to more than 15 years for child pornography offenses and illicit sexual conduct with a child.