DENVER (AP) — A former Colorado police officer shown on body camera video roughly arresting a 73-year-old woman with dementia and later seen joking about it with colleagues pleaded guilty to assault Wednesday in a plea deal opposed by the woman’s family.

Austin Hopp faces up to eight years in prison when he’s sentenced in May for second-degree assault, although the judge also has the discretion to sentence him to probation or a halfway house. He had faced a mandatory prison sentence of between 10 and 32 years under an original, more serious assault count he was charged with. 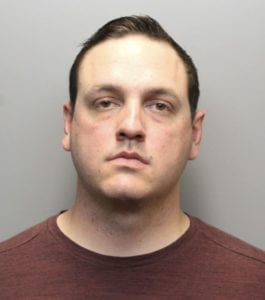 Hopp arrested Karen Garner in 2020 after she left a store without paying for about $14 worth of items in Loveland, about 50 miles (80 kilometers) north of Denver. Police body camera video shows that after she turned away from him, he grabbed her arm and pushed her to the ground, still holding the wildflowers she had been picking as she walked through a field.

The footage shows that when Hopp had Garner pushed against the hood of his car, she tried to turn around and repeated that she was trying to go home. He then pushed her back against the car and moved her bent left arm up near her head, holding it, saying, “Are you finished? Are you finished? We don’t play this game.”

A federal lawsuit that Garner filed claimed he dislocated her shoulder. The city settled the lawsuit for $3 million, money which her family said will pay for the around-the-clock care she has needed after her condition deteriorated following her arrest.

Speaking on behalf of Garner’s extended family, Garner’s daughter-in-law Shannon Steward told Judge Michelle Brinegar that the family never wanted a plea deal, which she said tend to be used when there is a lack of evidence or an inability to prove a case.

She noted the entire arrest and its aftermath was captured on video, including police station surveillance video in which Hopp and others talk about the arrest as they watch the body camera footage, sometimes laughing or joking about it. At one point, she said Hopp told the others to listen for the “pop” during the part of footage when Garner’s shoulder was allegedly dislocated. 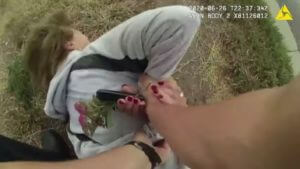 Body camera footage shows Karen Garner on the ground while being arrested June 26, 2020. Garner, who has dementia, had been walking through a field picking wildflowers when an officer stopped her because she was suspected of shoplifting. Former Colorado police officer Austin Hopp, who was shown on body camera footage roughly arresting Garner pleaded guilty to assault on March 2 in a plea deal. Garner’s family has objected to the plea deal. (Loveland Police Dept.)

Assistant District Attorney Matthew Maillaro said the plea deal had nothing to do with whether prosecutors could prove their case but was the result of multiple factors, including whether there should be a mandatory prison sentence or whether the court should decide the sentence.

“This is not sweeping this under the rug,” he said.

Brinegar said pleas are offered in most cases, and she accepted Hopp’s.

Hopp had also been charged with attempting to influence a public servant, a felony, and official misconduct, a misdemeanor. Those charges were not included in the plea deal.

Another officer who arrived to help Hopp after Garner was handcuffed was charged with failing to stop or report his actions and official misconduct, all misdemeanors. Daria Jalali’s lawyer told a judge Tuesday that she was in discussions with prosecutors on a possible resolution to her case, the Loveland Reporter-Herald reported.