FORT WORTH, Texas (AP) — A jury acquitted a former Texas police officer of criminally negligent homicide Monday after a gunshot meant for a menacing dog instead killed a woman whose welfare he had been sent to check.

The Tarrant County jury deliberated about 10 hours over two days before reaching its verdict on Ravinder Singh, a former Arlington police officer indicted in the August 2019 accidental shooting of Margarita Brooks, 30. 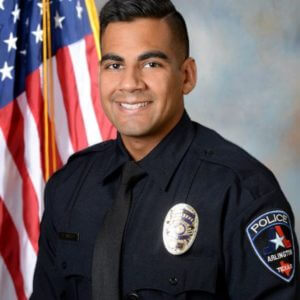 If convicted of criminally negligent homicide, he could have been sentenced to up to two years in a state jail and fined up to $10,000.

Singh, a Fort Worth-area rookie officer at the time of the shooting, was dispatched to check on Brooks, who was seen lying in the grass behind a shopping strip. Footage from Singh’s body camera showed him walking along a sidewalk and calling out, “Hello. Are you OK?” The woman replies, “Yeah, I’m fine.” A dog approaches and the officer asks, “Is that your dog?”

As the dog runs toward him, the officer yells, “Get back!” He begins to back up and then fires three shots. The woman screams, “Oh, my God!” and continues to cry out.

People who live or work in the area said they often saw Brooks walking with her boyfriend and a dog and that the couple appeared to be homeless. The dog, a Labrador mix police said weighed about 40 pounds (18.14 kilograms), was grazed by a bullet but survived.

Singh was placed on administrative leave after the shooting and resigned three months later.