LOS ANGELES (AP) — A former gynecologist at the University of California, Los Angeles was found guilty Thursday of five counts of sexually abusing female patients, in a criminal case that came after the university system made nearly $700 million in lawsuit payouts.

The Los Angeles jury found Dr. James Heaps, a longtime UCLA campus gynecologist, not guilty of seven of the 21 counts and were deadlocked on the remaining charges. 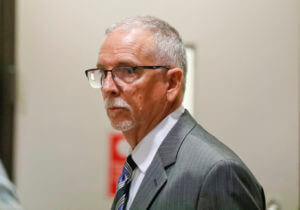 In the wake of the scandal that erupted in 2019 following the doctor’s arrest, UCLA agreed to pay nearly $700 million in lawsuit settlements to hundreds of Heaps’ patients — a record amount by a public university amid a wave of sexual misconduct scandals by campus doctors in recent years.

Heaps, 65, had pleaded not guilty to 21 felony counts in the sexual assaults of seven women between 2009 and 2018. He has denied wrongdoing.

Heaps was indicted last year on multiple counts each of sexual battery by fraud, sexual exploitation of a patient and sexual penetration of an unconscious person by fraudulent representation.

He is scheduled to be sentenced Nov. 17.

The district attorney’s office said it has not decided whether prosecutors will retry the hung counts.

“The trauma Dr. Heaps inflicted on the very people he had sworn to care for is immeasurable.” Los Angeles County District Attorney George Gascón said in a statement. “While we respect the jurors’ decisions on the acquitted counts, we are obviously disappointed.”

Heaps’ attorney did not immediately return a request for comment Thursday.

“The horrible abuse he perpetrated on cancer patients and others who trusted him as their doctor has been exposed and justice was done,” attorney John Manly, who represented more than 200 women in civil cases against Heaps and UCLA, said in a statement after the verdict.

UCLA’s payouts exceed a $500 million settlement by Michigan State University in 2018 that was considered the largest by a public university. The University of Southern California, a private institution, has agreed to pay more than $1 billion to settle thousands of cases against the school’s longtime gynecologist, who still faces a criminal trial in Los Angeles.

UCLA patients said Heaps groped them, made suggestive comments or conducted unnecessarily invasive exams during his 35-year career. Women who brought the lawsuits said the university ignored their complaints and deliberately concealed abuse that happened for decades during examinations at the UCLA student health center, the Ronald Reagan UCLA Medical Center or in Heaps’ campus office.

UCLA acknowledged it received a sex abuse complaint against Heaps from a patient in December 2017 and it launched an investigation the following month that concluded she was sexually assaulted and harassed, attorneys said.

Heaps, however, continued to practice until his retirement in June 2018. The university did not release its finding in the investigation until November 2019 — months after Heaps was arrested.

“UCLA Health is grateful for the patients who came forward,” the university said in a statement after the verdict. “Sexual misconduct of any kind is reprehensible and intolerable. Our overriding priority is providing the highest quality care while ensuring that patients feel safe, protected and respected.”