ALEXANDRIA, Va. (AP) — A Kansas native convicted of leading an all-female battalion of the Islamic State group had a long history of monstrous behavior that included sexual and physical abuse of her own children, family members said in court filings.

Prosecutors cited the abuse allegations in seeking a maximum 20-year sentence for Allison Fluke-Ekren, 42, when she is sentenced Nov. 1 for providing material support to the Islamic State group. 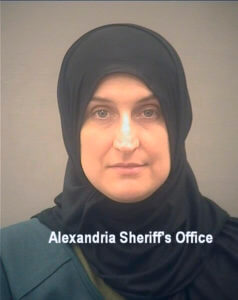 FILE – This undated photo provided by the Alexandria, Va., Sheriff’s Office in January 2022 shows Allison Fluke-Ekren. Fluke-Ekren, a Kansas native convicted of leading an all-female battalion of the Islamic State group, had a long history of behavior that included sexual and physical abuse of her own children, family members said in court filings Oct. 19, 2022. (Alexandria Sheriff’s Office via AP, File)

“Allison Fluke-Ekren brainwashed young girls and trained them to kill. She carved a path of terror, plunging her own children into unfathomable depths of cruelty by physically, psychologically, emotionally, and sexually abusing them,” First Assistant U.S. Attorney Raj Parekh wrote in a sentencing memo spelling out the allegations Fluke-Ekren’s own children and parents have made against her.

Fluke-Ekren pleaded guilty to terrorism charges after she admitted that she led the Khatiba Nusaybah, an all-female battalion of the Islamic State, in which roughly 100 women and girls — some as young as 10 years old — learned how to use automatic weapons and detonate grenades and suicide belts.

Parekh’s sentencing memo spells out how Fluke-Ekren went from a childhood on an 81-acre farm in Overbrook, Kansas, to an Islamic State leader, traveling from Kansas to Egypt to Libya and then to Islamic State-controlled territory in Syria. Along the way she had 12 children and five different husbands, several of whom were killed in fighting.

Through all the years, family and acquaintances of Fluke-Ekren portrayed her as the driving force who pushed her second husband into radicalization and convinced him to take her and the kids to Egypt. Her plans for an all-female battalion were ignored and rejected by other terrorist groups like Jabhat al-Nusra, and only the Islamic State finally acquiesced to her idea, prosecutors said.

Fluke-Ekren’s parents describe her as manipulative and difficult from the start. Family members describe how she would laughingly tell the story of how she tried to drown her brother in an icy lake as children.

Perhaps most disturbing in a laundry list of disturbing reports are allegations from two of her children that she engaged in sexual abuse of her kids.

Fluke-Ekren’s oldest child, a son, also says he was molested.

“My mother is a monster who enjoys torturing children for sexual pleasure,” he wrote in his own letter to the court.

It is unclear to what extent the abuse allegations will affect the sentence imposed by U.S. District Judge Leonie Brinkema because they are not directly related to the terrorism crimes. The daughter will be allowed to testify at the sentencing hearing because she was a victim of the terrorism — her mother enrolled her in the Khatiba Nusaybah as a child. The son is not expected to testify.

Fluke-Ekren, for her part, is denying many of the abuse allegations. She has complained that she has an inadequate opportunity to refute her family’s statements.

Fluke-Ekren “is shocked and saddened by these allegations but acknowledges Witness-1 (her daughter) experienced trauma in Syria,” defense attorney Joseph King wrote in his sentencing memo, which seeks a sentence below 20 years. “She cannot undo the pain that she caused in taking Witness-1 to Syria.”

Her son said Fluke-Ekren has a long history of denying abuse and people choosing to believe her over her children.

“I know her and I know she wants to lie her way out of this, to get a slap on the wrist and try to use a sob story to once again get power and access to victims,” the son wrote.

— She urged a woman to commit a suicide bombing. When the woman said she could no longer carry out an attack because she was pregnant, Fluke-Ekren took in the child after his birth so the woman could go forward with the attack.

— She told others that her oldest son was was born after she was raped by an American soldier as a way to ingratiate herself inside the terrorist groups where she sought to increase her status.

— She forced her 13-year-old daughter to marry an Islamic State fighter.

— In Libya, she sought to establish a school for girls in which she showed young girls videos of Iraqi women being raped by American soldiers. “She would tell us that if we didn’t kill the ‘kuffar’ (non-believer) that we would be raped,” the daughter wrote in court papers about the experience.