RICHMOND, Va. (WTVR) — The people who put up a new billboard in Richmond hope it will jog some old memories.

VCU student Cody Woodson was shot and killed walking back home from a neighborhood market in April 2021. 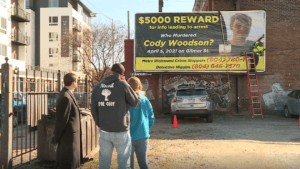 “Cody was a good child. He was a good person. He was doing good in life. He wanted to make a good life for himself and that was robbed from him,” Cody’s mother Angie Wright said. “Just because he was in the wrong place at the wrong time. I wish somebody would just come forward and say what they saw that night. Somebody saw something.”

To help encourage someone to come forward, the AWARE Foundation helped pay for a billboard with Cody’s picture to be displayed on West Marshall Street, near the Carver neighborhood crime scene.

“It just makes people aware. It helps people to see it, visualize it, where somebody might hear a name Cody Woodson, but with his picture being on there, they might see the face and say, ‘Oh, I know him’ or ‘Oh, I saw him that day,’ or something like that,” Richmond homicide detective James Higgins said.

Higgins said called Woodson’s slaying a tough case, but not the only unsolved homicide he’s working to close.

“We did have quite a many homicides last year,” he said. “Our caseload is what it is. And we just have to we have to work what we get and do the best that we can with what we get.”

This story was originally published Jan. 11, 2022, by WTVR in West Richmond, VA, an E.W. Scripps Company.