The family of a Black man in Connecticut, paralyzed when a police van without seatbelts braked suddenly, asked federal authorities Friday to file civil rights charges against the officers involved. 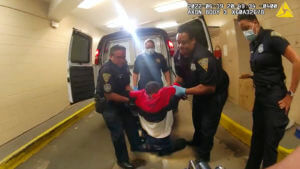 The driver was transporting Randy Cox, 36, to a police station in New Haven, Connecticut, on June 19 for processing on a weapons charge when he braked hard to avoid a collision, police said, causing Cox to fly headfirst into the wall of the van. His family said he remains paralyzed from the chest down.

“You ask yourself, was it cruel and unusual punishment to put him in the back of that police transportation van with no seat belt, knowing that if you’re speeding, if you slam on the brakes, that somebody is going to be seriously injured?” Crump said. 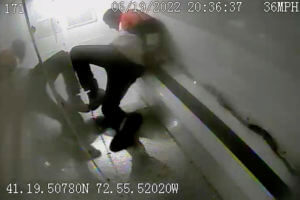 Cox’s supporters say the police mocked his cries for help and accused him of being drunk. Video shows the officers dragged him by his feet from the van and placed in a holding cell at the police department before paramedics finally took him to a hospital. Cox remains hospitalized and unable to speak because of his breathing tube.

The city announced a series of police reforms Thursday stemming from the case. The reforms include eliminating the use of police vans for most prisoner transports and using marked police vehicles instead. They also require officers to immediately call for an ambulance to respond to their location if the prisoner requests or appears to need medical aid.

Cox’s family said they appreciate the gesture but want more to be done. 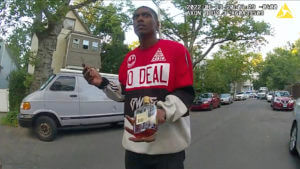 FILE – In this frame taken from police body camera video, Richard Cox is approached by New Haven police officers while being detained, Sunday, June 19, 2022, in New Haven, Conn. Two officers were placed on paid leave after Cox was seriously injured in the back of a police van and dragged around the police station before being taken to a hospital with signs of paralysis, authorities said. Cox’s family met with Justice Department officials, Friday, to discuss possible federal legal action. (New Haven Police via AP, File)

“Why do you need a policy that says if someone needs help for you to give them help?” Latoya Boomer, Cox’s sister, said. “That should never have to be a policy. That should be in your own brain already.”

Five members of the New Haven Police Department who were involved in the transport remain on leave while the episode is investigated.

“I — slash we — want them fired and arrested, and I’m going to keep saying it until it happens,” Boomer said.

Supporters planned a rally and a march through the streets of New Haven on Friday, demanding justice for Cox.