PLACERVILLE, Calif. (AP) — A father and son charged with sparking a devastating Northern California wildfire that destroyed about 1,000 homes near Lake Tahoe earlier this year are out of jail after a judge vastly reduced their bail, largely rejecting prosecutors’ arguments that the duo posed a flight risk. 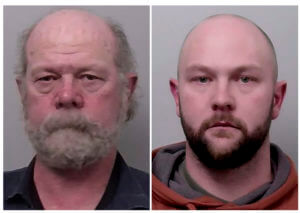 FILE – These images provided by the El Dorado County Sheriff’s Office shows David Smith, left, and his son Travis Shane Smith, who were arrested Dec. 8, 2021 on suspicion of starting a massive California wildfire that destroyed many homes and forced tens of thousands of people to flee Lake Tahoe communities earlier this year, authorities said. The two are out of jail after a judge vastly reduced their $1 million bails. A Placerville judge on Monday, Dec. 13, 2021, reduced bail for Travis Shane Smith to $50,000 and reduced bail for David Scott Smith to $25,000. (El Dorado County Sheriff’s Office via AP)

The Smiths were arrested Dec. 8 and charged in El Dorado County with recklessly starting a fire and illegal possession of a silencer. Travis Smith is also charged with illegal conversion or manufacture of a machine gun.

Travis Smith’s attorney, Mark Reichel, told The Associated Press on Tuesday that prosecutors have not laid out their theory as to how the men started the Aug. 14 Caldor Fire, which destroyed about 1,000 homes and other buildings, injured five people and forced tens of thousands of other to flee their homes.

Prosecutor Nora Hall argued that potential prison sentences — at least a dozen years for each men — made them potential flight risks and that Shane Smith’s social media posts indicated a lack of concern for proper firearms safety.

But El Dorado Superior Court Judge Ralph Marks said a bail reduction was warranted because there was no evidence the men acted maliciously or with intent. The charges also did not indicate they posed a danger to the community, the judge said.

Reichel and Linda Parisi, attorney for the elder Smith, said the men were in the area where the fire sparked and called 911 to report flames.

The criminal complaints do not specify how the machine gun and silencer tie into the Caldor Fire and the DA’s office has not offered an explanation. An email from AP to the office seeking comment was not immediately returned.

The fire crossed three Northern California counties, forcing tens of thousands of people to evacuate the resort town of South Lake Tahoe and surrounding areas before it was contained in October.

The next scheduled court date for the Smiths is Feb. 1.