Authorities are investigating whether he may have used his doorbell’s security camera to time his ambush, firing a high-powered rifle through the door as their team neared to search his home and computer. 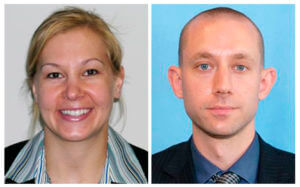 These photo released by the FBI show agents Laura Schwartzenberger, left, and FBI agent Daniel Alfin. The two were fatally shot Tuesday, Feb. 2, 2021, while serving a search warrant at the home of child pornography suspect David Huber, a 55-year-old computer technician in Sunrise, Fla. Three other agents were wounded. (FBi via AP)

That’s a danger police nationwide are facing: As outdoor surveillance cameras now protect about half of U.S. homes from criminals, the criminals are using them to get a jump on officers about to raid theirs. Some doorbell cameras even have motion sensors that alert owners when anyone comes within 100 feet (30 meters).

The cameras, combined with the military-style weaponry many criminals possess, leave law enforcement offers particularly vulnerable. In such situations, the house’s doors and walls offer no protection, noted Ed Davis, Boston’s police commissioner from 2006 to 2013.

“You take a military assault rifle and you add to that a surveillance system that allows (the suspect) to identify where officers are as they approach the house — you are a sitting duck,” Davis said.

The FBI says David Huber, a 55-year-old computer technician with no criminal record, gunned down agents Laura Schwartzenberger and Daniel Alfin and wounded three others. He then killed himself. The agency hasn’t said whether Huber’s camera had a motion detector, but that could explain why he was awaiting the agents Tuesday before dawn — an hour officers often pick for raids because the suspect is likely asleep.

“A child exploitation suspect, he is going to be on his toes all day long — he doesn’t want to get caught because he is going away for a long time,” said New York City Detective Robert Garland.

In the 1980s and ’90s, a home with outdoor surveillance cameras was often a sign the resident was a drug dealer or otherwise a criminal, according to Davis and retired SWAT officer David Thomas, now a criminal justice professor at Florida Gulf Coast University. A good system could cost thousands.

“They were the only ones who could afford it,” said Thomas, who worked for the Grand Rapids, Michigan, and Gainesville, Florida, police departments.

Davis said such cameras were so often an indication of criminality, some judges considered their presence when approving officers’ warrant requests.

The cameras were also large and hard to hide — officers could spot them during pre-raid surveillance and approached accordingly.

But today, a technically savvy person can install security cameras for a few hundred dollars and a good doorbell camera can be purchased for less than $200. Many cameras are small and easy to hide.

Thomas said police tactics often trail new technology and will need to be adjusted to deal with doorbell cameras and other home surveillance systems. He said departments may start having more warrants served by heavily armed tactical units and use diversions, such as breaking a side window before going to the door, to distract the suspect. 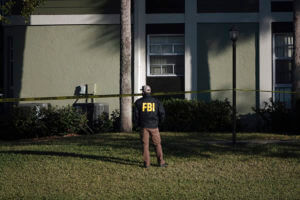 Law enforcement personnel continue to work at an apartment complex the day after a deadly shooting in Sunrise, Fla., Wednesday, Feb. 3, 2021. Several FBI agents were killed and others were wounded while trying to serve a search warrant on a child pornography suspect in Florida. FBI authorities say the suspect also died. (Joe Cavaretta/South Florida Sun-Sentinel via AP)

Departments might also ask judges to issue more “no-knock” warrants, which allow officers to break down the door immediately and without warning. That would fly in the face of growing calls in some cities to do away with such warrants after they have resulted in the deaths of innocent people.

It was while exercising a no-knock warrant that Louisville, Kentucky, police killed Breonna Taylor in her apartment 11 months ago, sparking nationwide protests.

“The issue is very complex, but the reality is there has to be something” for officers to protect themselves, Thomas said.

Davis said there are some countermeasures officers can take against surveillance cameras but they carry the risk of tipping off suspects, particularly when they believe a raid is imminent. Some police departments have devices that can jam the Bluetooth or other radio-wave systems some cameras use to send images to their monitor. And they can cut the home’s power, although many camera systems have battery backups.

Serving warrants has always been one of law enforcement’s most dangerous jobs, even before sophisticated home security cameras were commonplace. On the Grand Rapids SWAT team, Thomas was the door kicker — the officer who is directly in the line of fire if the suspect is waiting in ambush. He said the door is a particularly dangerous spot.

“You never know what is waiting on the other side,” he said.

Davis said the FBI will do a comprehensive report on the shooting. When other agencies receive it, they will pore over it so they can protect their own officers from gunmen with security cameras.

“It has to be reviewed — there are lessons to be learned from this terrible tragedy,” Davis said.