Federal prosecutors on Monday recommended a prison sentence of more than two months for a Virginia man who stormed the U.S. Capitol wearing a “Camp Auschwitz” sweatshirt.

Photographs of Robert Keith Packer wearing the sweatshirt with the anti-Semitic message went viral after the Jan. 6, 2021, attack on the Capitol. When FBI agents asked him why he wore the sweatshirt, he “fatuously” replied “because I was cold,” prosecutors said in their sentencing memo. 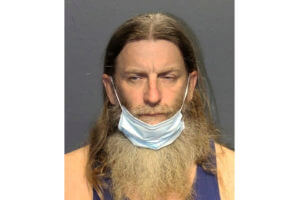 “Without expressing any remorse for being part of the rioting that day, Packer continually said it was ‘hard to tell’ which side people were on,” prosecutors wrote.

More than 100 police officers were injured when a mob of Donald Trump supporters attacked the Capitol while Congress was holding a joint session to certify President Joe Biden’s 2020 electoral victory.

U.S. District Judge Carl Nichols is scheduled to sentence Packer on May 23. He faces a maximum sentence of six months imprisonment after pleading guilty in January to a misdemeanor count of parading, demonstrating or picketing in a Capitol building.

Prosecutors asked Nichols to sentence Packer to 75 days of incarceration followed by three years of probation and 60 hours of community service.

The words “Camp Auschwitz” were above an image of a human skull on Packer’s sweatshirt. It also bore the phrase “Work Brings Freedom,” a rough translation of the German words above the entrance gate to Auschwitz, the concentration camp in Poland where Nazis killed more than 1 million men, women and children.

Packer, 57, of Newport News, Virginia, is a self-employed pipe fitter and a nonlicensed plumber. Prosecutors say he has a lengthy criminal record, with approximately 21 convictions, mostly for drunken driving and other motor vehicle violations.

Packer told the FBI that he was about 10 to 12 feet away from a rioter, Ashli Babbitt, when a police officer fatally shot her.

“He told the agents he heard the shot and saw her fall back from the window she was trying to climb through,” prosecutors wrote.

FBI agents arrested Packer a week after the riot. He has remained free pending his sentencing hearing.

Packer was evasive and minimized his actions when FBI agents interviewed him, according to prosecutors.

“He was more interested in relaying how he received hate mail and how he was ‘hounded’ by the media for interviews,” they wrote.

More than 790 people have been charged with federal crimes related to the Capitol riot. Nearly 300 of them have pleaded guilty, mostly to misdemeanors. Over 170 of them have been sentenced.

Three months is the longest prison sentence so far among rioters who have pleaded guilty to misdemeanors, according to an Associated Press review of court records. More than a dozen defendants who pleaded guilty to riot-related felonies have been sentenced to prison terms ranging from six months to five years and three months.