INDIANTOWN, Fla. (WPTV) — A mother of three in Florida is recovering from a gunshot wound, struck by a stray bullet fired by someone using her neighbor’s property for target practice, according to investigators.

Monday night, Heather Sitton was awaiting surgery following the shooting Sunday afternoon in Indiantown at her home in Martin County.

Jason Sitton, Heather’s husband, said there were numerous people in their backyard, including their three young children, when they heard gunfire at a neighboring property. They also have chickens, a mule, donkey, pigs, and dogs.

Sitton said it is common for people in that area to use their backyards for target practice and to hear gunfire.

Sunday, however, the bullets were coming toward their property. 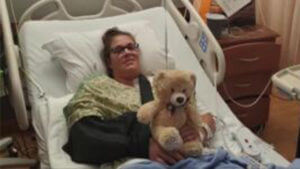 A mother of three in Florida is recovering from a gunshot wound, struck by a stray bullet fired by someone using her neighbor’s property for target practice, according to investigators. (WPTV)

“I’m like, what is going on? And I started yelling at the neighbor right next to us like ‘hey are you guys doing fireworks?'” Sitton said. “And they’re like, ‘no, we thought it was you.’ “As soon as I said that my wife just dropped.”

His wife was shot in her shoulder, the bullet passing through her collar bone, exiting the other shoulder.

Sitton said his friend was right near her when she was shot and immediately started applying pressure to her wound to slow the bleeding.

The children took cover. A family friend helped them get inside.

“I’m yelling at the top of my lungs, ‘stop you just shot my wife! Like, stop! Help! Help!’ And they just kept shooting,’” Sitton said.

Neighbor and nearby business owner, Mark Rutizer, said he complained to the sheriff’s office just a few months ago about gunshots from the same property.

“I’ve said it before that someone will get shot and unfortunately yesterday that took place,” Rutizer said.

He said he had bullets flying over his home about a quarter of a mile away.

“You don’t want to call on your neighbors but [you do] when your family has to duck down,” Rutizer said.

Martin County Chief Deputy John Budensiek said four people were shooting at the property. According to an incident report, the owner of the property said the four people shooting there did not have permission to shoot on his property.

Budensiek said they were shooting at a 5-foot berm.

“Unfortunately, it had about 7 or 8 feet of weeds and trees on top of it so the bullets seemed to be passing through the trees and weeds,” Budensiek explained.

Sitton said the shooters should have known there were homes in the distance. Budensiek said the shot was fired about 900- yards away.

“It’s obvious that people are here, that we live here,” Sitton said.

Budensiek said it is legal for people to shoot on that property and in a backyard, but precautions need to be taken.

Lt. Joe Kukuvka said the weapon that was used was a high-powered rifle.

“A high-powered rifle round could travel up to a couple miles in some circumstances…So if you’re not going to have a proper backstop, you have to have a lot of distance behind you,” Kukuvka said.

Budensiek said it might be hard to pursue criminal charges, but an investigation is ongoing.

“We may never be able to accurately determine who actually fired the round. All four individuals fired the gun that we believe shot the bullet that hit the victim,” Budensiek said.

hey hope this serves as an important reminder to shoot safely and always think about who might be beyond the barrel.

“Once that bullet leaves the gun there’s no turning back. If you’re not responsible, bad things can happen to other people,” Budensiek said.

Heather gave WPTV a statement saying, “I am grateful that it did not hit any of the children. I thank God that my life was spared.”

This story was originally published Jan. 11, 2022, by WPTV in West Palm Beach, an E.W. Scripps Company.