Deputies responded to a rollover crash in the 12500 block of South Indian River Drive around 11 p.m. Wednesday and found a vehicle unoccupied.

The sheriff’s office said Deputy Cody Colangelo, 22, located the driver, Leigha Michelle Day, 21, down an embankment near the crash scene.

Colangelo’s body camera video released Friday shows the deputy walking down a flight of steps toward Day, who’s pacing along a shoreline.

“Were you just in a crash?” Colangelo says.

Day quickly begins to walk away. 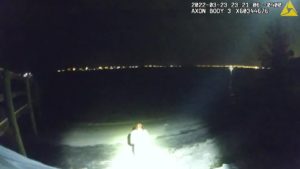 “Walk upstairs, all right? Let’s get out of this water area,” Colangelo says.

Colangelo eventually convinces Day to walk up a flight of stairs to the road.

Day gets about halfway up the stairs before suddenly turning around and stabbing Colangelo in the neck. The deputy screams out, the blade nicking his carotid artery, authorities said.

Day ran off and Colangelo fired one shot at her, but missed.

Despite being stabbed and suffering a severe injury, Colangelo chased after Day while applying pressure to his wound, the sheriff’s office said.

Colangelo, who joined the St. Lucie County Sheriff’s Office in 2020, was able to radio other deputies for help. Authorities eventually found Day hiding down an embankment and took her into custody.

Colangelo was taken to HCA Florida Lawnwood Hospital, where he underwent a two-hour surgery during which doctors replaced part of the artery in his neck with one from his leg.

Colangelo is being praised for using his training to save his life, applying pressure to his neck while chasing after Day and calling for backup. 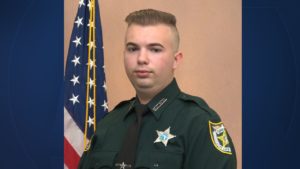 “Of all the things, that’s probably the thing that was the most important maneuver before he got here,” Binette said.

Binette said Colangelo is lucky, and had he been stabbed two to three inches lower, the outcome could have been much different.

“If the knife had a downward trajectory, very, very different story,” Binette said. “He probably wouldn’t have made it to the hospital.”

Colangelo as an incision on his neck, but the doctor said he should be healed in a few weeks.

Day, meanwhile, remains behind bars in the St. Lucie County Jail on a charge of premeditated first-degree attempted murder. Investigators believe she was under the influence of alcohol or drugs at the time of the stabbing.

The sheriff’s office said it’s unclear why Day suddenly attacked Colangelo as he tried to help her.

This story was originally published March 25 by WPTV in West Palm Beach, an E.W. Scripps Company.