BATON ROUGE, La. (AP) — A former Louisiana teacher who pleaded guilty to tainting cupcakes with her ex-husband’s bodily fluids and feeding them to school children was sentenced Friday to 41 years in prison. 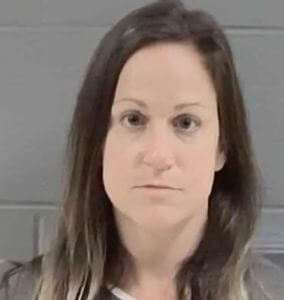 On Monday, Cynthia Perkins, 36, agreed to a deal with prosecutors in the Louisiana Attorney General’s Office, pleading guilty to one count each of producing child pornography, second-degree rape and mingling harmful substances, news outlets reported. Jury selection in her trial was to have started that day.

“Today, Cynthia Perkins admitted to her crimes and pled guilty in court,” Louisiana Attorney General Jeff Landry said. “She not only waived any right to appeal, and attempt to avoid conviction, but she also spared the victims from reliving her horrific crimes during this particular trial.”

The 41-year sentence had been agreed upon in plea negotiations, her attorneys said. As part of the deal, she will be required to testify against her ex-husband. Also, she will not be eligible for parole until she enters the 41st year of her sentence.

Per the plea deal, Perkins had to agree to certain facts in the case such as assisting her husband in the sexual assault of a juvenile, helping him film a juvenile while bathing, and lacing desserts with his semen before giving them to school-aged children.

State District Judge Erika Sledge handed down the sentence after an hour of testimony from attorneys, Cynthia Perkins’ family, Perkins herself and the families of victims in the case.

“To the family of the victims, I can’t imagine what this whole process has been like for you,” Sledge told those in the courtroom Friday. “To the juvenile victim, I hope this has given her some sense of closure.”

Perkins voiced a lengthy apology to the victims, her friends and family before the sentencing.

“I would also like to apologize to my three children. I haven’t spoken to them in three years. I love them and I miss them, and I’m sorry,” Perkins said.

But one of her children, born during her first marriage, described her in a letter to the court as a “horrible” and “manipulative” mother.

“My life is so much better without you,” the letter read.

Meanwhile, Dennis Perkins, 46, is expected to go to trial later this year. Cynthia Perkins’ attorneys said she was manipulated by him into committing child sex crimes. They also called Dennis Perkins the “mastermind” behind the couple’s criminal activity.