MONTGOMERY, Ala. (AP) — Former U.S. Senate candidate Roy Moore, testifying in a defamation case brought by a woman who said he sexually touched her decades ago when she was 14, maintained Monday that he never met his accuser.

“I don’t know her,” Moore testified under questioning from his attorney.

He disputed Leigh Corfman’s account that he molested her at his home after meeting her with her mother at the courthouse. “I never saw Ms. Corfman in Etowah County or any other place,” Moore said. adding at another point, “I never knew her. I never took her to my home.” 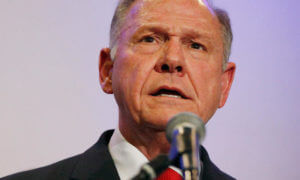 FILE – Then U.S. Senate candidate Roy Moore at a 2017 news conference in Birmingham, Ala.

Corfman came forward during Moore’s 2017 Senate campaign and said Moore sexually touched her in 1979 when she was 14 and he was in his 30s and working as an assistant district attorney in Etowah County. Her story was first reported by The Washington Post. She was one of several women who said Moore pursued relationships with them when they were teens.

The allegations roiled Moore’s campaign and he ended up losing to Doug Jones, who became the first Alabama Democrat elected to the Senate in 25 years. Jones lost the next election to Republican Tommy Tuberville, who now holds the Senate seat.

Corfman filed suit alleging Moore defamed her by branding her as a liar when he denied the accusations. Moore countersued, claiming Corfman injured his reputation with false allegations meant to hurt him politically. Jurors in the trial are tasked with deciding both claims.

Trying to make a case for compensation, Moore attorney Julian McPhillips read crassly worded emails and social media messages to the Moore campaign in which people called the former state court judge a pedophile and a pervert.

Moore, reiterating a phrase he used during the 2017 Senate race, maintained the accusation was “false and malicious.”

“There was never any mention of any impropriety in my entire career until the end of the 2017 election, 32 days before the election,” Moore testified.

It is anticipated that jurors will begin deliberating sometime Tuesday after attorneys make closing arguments.

Attorneys for Corfman indicated they have two final witnesses. One is an attorney who they said will testify that he saw Moore with Corfman at the courthouse in 1979 outside a child custody hearing involving her parents. Moore’s attorneys objected to the inclusion of what they described as a surprise witness.

During cross-examination Monday, Corfman’s attorneys attempted to cast doubt on the truthfulness of Moore’s statements. Corfman attorney Melody Eagan asked Moore about statements he made on the campaign trail after the Washington Post article, and a campaign ad about it, saying, “I do not know any of these women.” Moore at other times acknowledged he knew two of the women. Both testified at trial that they dated Moore when they were around 17 or 18.

Moore had testified that Corfman was the only person who accused him of misconduct. Over the objections of Moore’s attorneys, Eagan asked Moore about another woman, who arose in media reports, and accused Moore of misconduct. She did not testify during the trial. Moore responded that was a “false allegation.”

Moore’s attorneys also presented several character witnesses, including his sister, a former bodyguard, a former police officer and several women who said they were around Moore as teens but never witnessed any misconduct. All testified that Moore has a reputation for honesty and they never heard any accusations of misconduct with young women.

Corfman’s attorney, Neil Roman, questioned some of the witnesses on cross-examination, and they acknowledged they did not have any personal knowledge of Corfman’s allegation.

While Corfman is seeking only a court ruling that Moore defamed her, Moore’s lawyers want money from her.

Corfman testified on Tuesday that Moore “has done everything possible to damage my veracity, the truth of my words, the statements I have made about his sexual molestation of me at 14. He knows just as well as I do that he was there.”