Their indictments follow the abrupt resignation in March of Republican Rep. Robin Smith, who pleaded guilty to federal wire fraud charges involving Casada and his chief of staff, Cade Cothren. Speculation has swirled about what additional charges might come in the corruption probe. 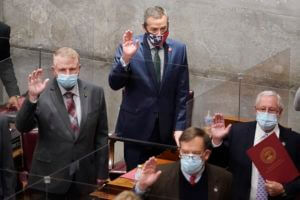 FILE-Rep. Glen Casada, R-Franklin, top center, is sworn in with other members on the first day of the legislative session Tuesday, Jan. 12, 2021, in Nashville, Tenn. (AP Photo/Mark Humphrey)

FBI agents arrested Casada and Cothren at their homes Tuesday morning. If convicted, they each face up to 20 years in prison. Both pleaded not guilty Tuesday and received pretrial release with travel restricted to the middle district of Tennessee unless otherwise approved.

The 20-count charging document alleges Casada and Cothren exploited their positions of power by working with another unnamed lawmaker to funnel money to themselves using a political consulting firm — known as Phoenix Solutions, LLC — to conceal their involvement.

Cothren registered the firm in New Mexico because the state allows anonymous registration of LLCs, and rebuffed requests for in-person meetings with Casada’s fellow lawmakers, saying the company representatives were out of state.

The trio deceived other Tennessee lawmakers in a conspiracy “to enrich themselves by obtaining bribes and kickbacks from Cothren, in exchange for securing the approval of Phoenix Solutions as a mailer program vendor,” a Justice Department news release said.

House Speaker Cameron Sexton, who succeeded his fellow Republican in the leadership post, was among several lawmakers and former or current staffers to testify in front of a grand jury in March. Sexton commended the FBI on Tuesday, saying he will continue assisting in the investigation if a trial is needed. Smith also promised to cooperate as a potential witness.

“Today is a good day for Tennesseans because we did not turn a blind eye on these criminal activities,” Sexton said.

Casada resigned as speaker in 2019 but held onto his seat after revelations that he and Cothren had exchanged sexually explicit text messages about women years earlier. He is not running for reelection this year. Cothren lost his legislative job in the texting scandal, but remained involved in Republican politics.

FBI agents searched the homes and offices of several state lawmakers in January 2021, including those of Casada and Smith, and the home of Cothren.

The charging documents revealed Tuesday say Cothren launched Phoenix Solutions with Smith’s and Casada’s “knowledge and support” to offer mail and consulting services to lawmakers. All three claimed the firm was run by a “Matthew Phoenix” when in fact it was a made-up alias for Cothren, and Casada knew the name was fictitious, the documents allege.

The documents allege Smith emailed Cothren at one point saying he “may have to assume the role of Matthew again.” He replied saying, “Matthew, reporting for duty!” and included a GIF of “a salute from Harrison Ford’s character Han Solo in the movie Star Wars,” officials said.

Federal investigators said a separate text exchange showed Casada texted Cothren in late 2019 saying “I think this is starting off well I’m pleased!” Cothren later cautioned that “we just have to make sure no one knows it’s me involved,” they said.

When Casada raised concerns about lawmakers wanting “representatives from Phoenix” to make an in-person presentation, Cothren responded that they would remind lawmakers “they live in New Mexico. Will have to get on the phone for it and I could disguise my voice if I has (sic) to.”

Phoenix Solutions received roughly $52,000 from the state in payments associated with the mailer program, according to the charging documents.

Ahead of the 2020 GOP primary election, the political action committee targeted then-Rep. Rick Tillis, the brother of North Carolina U.S. Sen. Thom Tillis. Rick Tillis lost to Republican Rep. Todd Warner, who was among those subject to the FBI searches in January 2021.

The Tennessee Registry of Election Finance decided to reopen its probe into the PAC after its treasurer testified in January that she is Cothren’s former girlfriend and opened the PAC because Cothren asked her to. She said Cothren assured her she was doing nothing wrong and that she took no further action.

Cothren has informed the registry that he is invoking his Fifth Amendment right against self-incrimination and won’t abide by its subpoena. The registry handed the case off to state prosecutors. The state has sued over Cothren’s refusal.

Casada also was subpoenaed, and told the registry he wasn’t involved with the PAC. Casada opted to run for Williamson County clerk this year instead of his statehouse seat, and lost in the GOP primary.