ORLANDO, Fla. (AP) — Sentencing for a former Florida tax collector whose arrest led to a probe of U.S. Rep. Matt Gaetz has been set for December, as his lawyer indicated that his client continues to cooperate with federal investigators in multiple jurisdictions.

After several postponements, former Seminole County Tax Collector Joel Greenberg will be sentenced on Dec. 1 in federal court in Orlando for six federal crimes, including sex trafficking of a child, identity theft, stalking, wire fraud and conspiracy to bribe a public official, according to an order filed this week. He pleaded guilty to the charges last May. 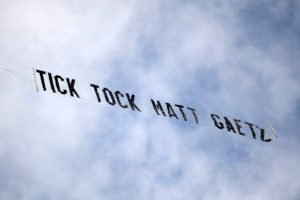 FILE – A banner reading “Tick Tock Matt Gaetz” is flown above the federal courthouse during a hearing for Joel Greenberg, on May 17, 2021, in Orlando, Fla. Sentencing for a former Florida tax collector whose arrest led to a probe of U.S. Rep. Matt Gaetz has been set for December 2022, as his lawyer indicated that his client continues to cooperate with federal investigators in Florida, the District of Columbia and other jurisdictions. (AP Photo/Phelan M. Ebenhack, File)

Greenberg faces a minimum 12 years in prison, although court papers indicate his attorney plans to ask for less because of his continuing cooperation with federal prosecutors.

Greenberg has been cooperating in active investigations in Orlando and the District of Columbia, as well as in other jurisdictions, the former tax collector’s attorney, Fritz Scheller, said in court papers asking to seal a motion about Greenberg’s sentencing date.

“The unopposed motion to set the date of the sentencing hearing provides confidential information concerning these investigations, as well as information regarding the nature and extent of Mr. Greenberg’s ongoing cooperation,” Scheller said.

The judge in the case granted the request to seal the motion.

Greenberg’s cooperation could play a role in the ongoing probe into Gaetz, who is being investigated over whether he paid a 17-year-old for sex. Gaetz has denied the allegations and previously said they were part of an extortion plot. Gaetz, a Republican, represents a large part of the Florida Panhandle. No charges have been brought against the congressman.

The Greenberg plea agreement said the former tax collector admitted being “involved in what are sometimes referred to as ‘sugar daddy’ relationships where he paid women for sex, but attempted to disguise the payments as ‘school-related’ expenses or other living expenses.”

Greenberg has been linked to a number of other Florida politicians and their associates. So far, none of them has been implicated by name in the sex trafficking probe.