EATONTON, Ga. (AP) — A Georgia inmate was found guilty of murder Thursday in the slayings of two prison guards shot during a bloody escape in 2017, leaving the jury to decide next whether the crime warrants a death sentence.

The Putnam County jury took just a few hours to convict Donnie Rowe of malice murder and other crimes in the killings of Sgt. Christopher Monica and Sgt. Curtis Billue, news outlets reported. The two Baldwin State Prison officers were shot with one of their own guns on a prison transport bus. 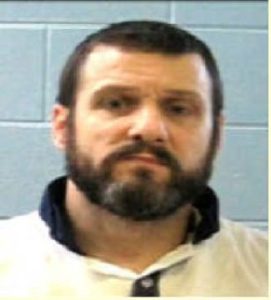 One of Rowe’s defense attorneys told jurors there was no question he had committed serious crimes. Still, lawyer Adam Levin said during closing arguments Thursday that prosecutors had failed to prove that Rowe intended for either of the guards to die.

Monica and Billue were transporting prisoners by bus in June 2017 when Rowe opened an unlocked security gate separating the guards from the inmates. Fellow inmate Ricky Dubose followed Rowe through the gate. Rowe used chains from his shackles to strike Monica, who had fallen asleep, while Dubose grabbed a gun from a weapons box and fired seven shots that killed the officers.

The fugitive inmates were arrested in Tennessee days later.

Security cameras on the bus recorded the violent escape southeast of Atlanta, while roughly 30 other prisoners witnessed the killings from the back of the bus.

District Attorney Wright Barksdale argued that Rowe had been “the key that opened the gates of hell” by hatching the escape plot, WGXA-TV reported.

“It was a calculated crime that took both of them to complete,” Barksdale said.

In addition to the security video, jurors got a firsthand look in the courthouse parking lot of the bus where the slayings occurred. They also heard from more than witnesses, from the man whose car the inmates stole right after fleeing the bus to a homeowner in Rutherford County, Tennessee, who grabbed a pistol and called 911 after seeing Rowe and Dubose walking toward his house. He testified that the exhausted fugitives laid down and surrendered.

Rowe did not testify. His defense attorneys played the jury audio and video of Dubose saying he was the one who shot both officers. Then the defense lawyers rested their case.

Following the verdict, Rowe’s trial enters a penalty phase in which the jury will have to decide whether to sentence him to death or to life in prison.

Rowe was already serving a sentence of life without parole for an armed robbery conviction when the guards were slain four years ago.

Dubose will be tried separately for murder and other crimes.