U.S. Sen. Raphael Warnock, a Democrat elected to the Senate last month, is named as a respondent in the case because of his former ties to the group, The Atlanta Journal-Constitution reported. 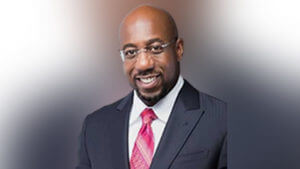 It’s among 35 cases involving potential violations of election law being sent from the State Election Board to the attorney general or local prosecutors, Georgia Secretary of State Brad Raffensperger said in a statement Thursday.

The New Georgia Project, which bills itself as a nonpartisan effort to register voters, is accused of submitting 1,268 voter registration applications after the 10-day deadline to do so. The missed deadline caused voters to be disenfranchised in the March 19, 2019, special election, according to Raffensperger’s statement.

It’s among 35 cases involving potential violations of election law that the State Election Board is sending to the attorney general or local prosecutors, Georgia Secretary of State Brad Raffensperger said in a statement Thursday.

Warnock was listed as the CEO for the New Georgia Project at the time, but the organization says his actual position was chairman of its board. He resigned from that post on Jan. 28, 2020.

Warnock and the New Georgia Project didn’t immediately respond to the newspaper’s request for comment.

The New Georgia Project was founded by Democrat Stacey Abrams in 2014. It has registered nearly 500,000 people from underrepresented communities to vote in Georgia. The group also advocates for civil and human rights “and works to advance justice on behalf of historically marginalized communities,” it said in a recent news release.

“Election fraud is not tolerated in Georgia. When there is evidence of it, the people responsible face prosecution,” said Raffensperger, chairman of the five-member election board.

“Georgia has multiple safeguards in place that allow our team of investigators to discover fraudulent voting,” he said. “They worked to catch the wrongdoing in these cases, and they maintain the security of Georgia elections.”

Separately, a Georgia prosecutor said earlier this week that she’s opened a criminal investigation into “attempts to influence” the outcome of last year’s general election. Fulton County District Attorney Fani Willis did not specifically mention former President Donald Trump in the letters she sent to state officials Wednesday announcing her investigation. But Willis spokesman Jeff DiSantis told The Associated Press that a call Trump made to Secretary of State Brad Raffensperger last month is “part of it.”