BOISE, Idaho (AP) — Authorities say a sixth-grade girl brought a gun to her Idaho middle school, shot two students and a custodian, and then was disarmed by a teacher.

Officials said at a news conference Thursday that the three victims are expected to survive their injuries.

Jefferson County Sheriff Steve Anderson says the girl pulled a handgun from her backpack and fired multiple rounds inside and outside Rigby Middle School.

A female teacher disarmed the girl and held her until law enforcement arrived and took her into custody. 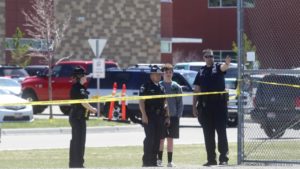 Police stand with a young man outside Rigby Middle School following a shooting there earlier Thursday, May 6, 2021, in Rigby, Idaho. Authorities said that two students and a custodian were injured, and a female student has been taken into custody. (AP Photo/Natalie Behring)

The two students who were shot will be monitored overnight, KIVI reported.

One student was shot once in an extremity and may require surgery in the future.

The second student was potentially shot twice, according to a hospital official. That student had two injuries, one in an upper extremity and another in a lower extremity.

The custodian was treated in the emergency room and has been released.

Officials are not releasing the names of anyone involved in the incident at this time.

Authorities say they’re investigating the motive for the attack and where the girl got the gun.