KHIMKI, Russia (AP) — A lawyer for WNBA star Brittney Griner at her drug possession trial in Russia on Friday gave the court a U.S. doctor’s letter recommending she use medical cannabis to treat pain. 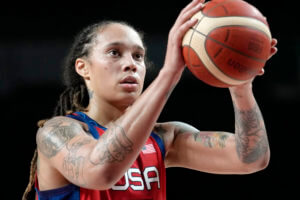 Griner, a two-time Olympic gold medalist and standout for the Phoenix Mercury, was arrested at Moscow’s Sheremetyevo Airport in February after customs officials said they found vape canisters containing cannabis oil in her luggage. She faces up to 10 years in prison if convicted on charges of transporting drugs.

In court last week, Griner pleaded guilty and acknowledged possessing the canisters but said she had no criminal intent and said they were in her luggage because she packed hastily in her return to Russia to play for the UMMC Ekaterinburg basketball team during the WNBA’s offseason.

In Russia’s judicial system, admitting guilt doesn’t automatically end a trial. Since that plea, her court sessions have focused on in-person and written testimony to her good character and athletic prowess.

Griner wore a Nirvana T-shirt as she sat inside the defendant’s cage that is customary in Russian courtrooms. At one point, she held up a photo of fellow WNBA players wearing her name and No. 42 on their uniforms in tribute during part of Sunday’s All-Star Game in Chicago. 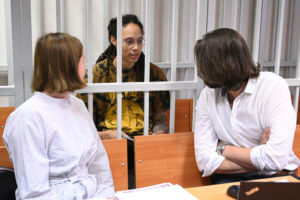 WNBA star and two-time Olympic gold medalist Brittney Griner speaks with her lawyers Alexander Boykov, right, and Maria Blagovolina at a court room prior to a hearing in the Khimki district court, just outside Moscow, Russia, Friday, July 15, 2022. Griner was arrested in February at the Russian capital’s Sheremetyevo Airport when customs officials said they found vape canisters with cannabis oil in her luggage. She has been jailed since then, facing up to 10 years in prison if convicted. (AP Photo/Dmitry Serebryakov)

“The attending physician gave Brittney recommendations for the use of medical cannabis,” said her lawyer, Maria Blagovolina. “The permission was issued on behalf of the Arizona Department of Health.”

Medical marijuana is not legal in Russia.

The defense on Friday also submitted tests she underwent as part of an anti-doping check, which didn’t detect any prohibited substances in her system.

The next hearing of Griner’s case was scheduled for July 26.

U.S. President Joe Biden and Secretary of State Antony Blinken have said they are doing all they could to win her release, as well as that of other Americans the U.S. considers “wrongly detained” by Russia, including former Marine Paul Whelan who is serving 16 years on an espionage conviction.

Washington may have little leverage with Moscow, though, because of strong animosity over its military operation in Ukraine.

“In the hearings yesterday and today what became very clear is the tremendous amount of respect and admiration both in the United States and here in Russia where Miss Griner has been playing basketball for seven years, not only for her professional achievements but for her character and integrity,” U.S. Embassy charge d’affaires Elizabeth Rood said outside the courthouse in the Moscow suburb of Khimki, where the airport is located.

The director and team captain of UMMC Ektaerinburg testified on her behalf on Thursday.

Russian media have speculated that Griner could be swapped for Russian arms trader Viktor Bout, nicknamed “the Merchant of Death,” who is serving a 25-year sentence in the U.S. after being convicted of conspiracy to kill U.S. citizens and providing aid to a terrorist organization.

Russia has agitated for Bout’s release for years. But the wide discrepancy in the seriousness of their cases could make such a trade unpalatable to Washington. Others have suggested that Griner could be traded along with Whelan, who is serving 16 years in Russia on an espionage conviction that the U.S. has described as a setup.

The State Department’s designation of Griner as wrongfully detained moves her case under the supervision of its special presidential envoy for hostage affairs, effectively the government’s chief hostage negotiator. The classification has irritated Russia.

Asked about the possibility of Griner being swapped for a Russian jailed in the U.S., Deputy Foreign Minister Sergei Ryabkov, the senior Russian diplomat, has noted that until her trial is over “there are no formal or procedural reasons to talk about any further steps.”

Ryabkov warned that U.S. criticism, including the description of Griner as wrongfully detained and dismissive comments about the Russian judicial system, “makes it difficult to engage in detailed discussion of any possible exchanges.”

Griner’s detention has been authorized through Dec. 20, suggesting the trial could last months. Griner’s lawyers, however, said they expect it to conclude around the beginning of August. 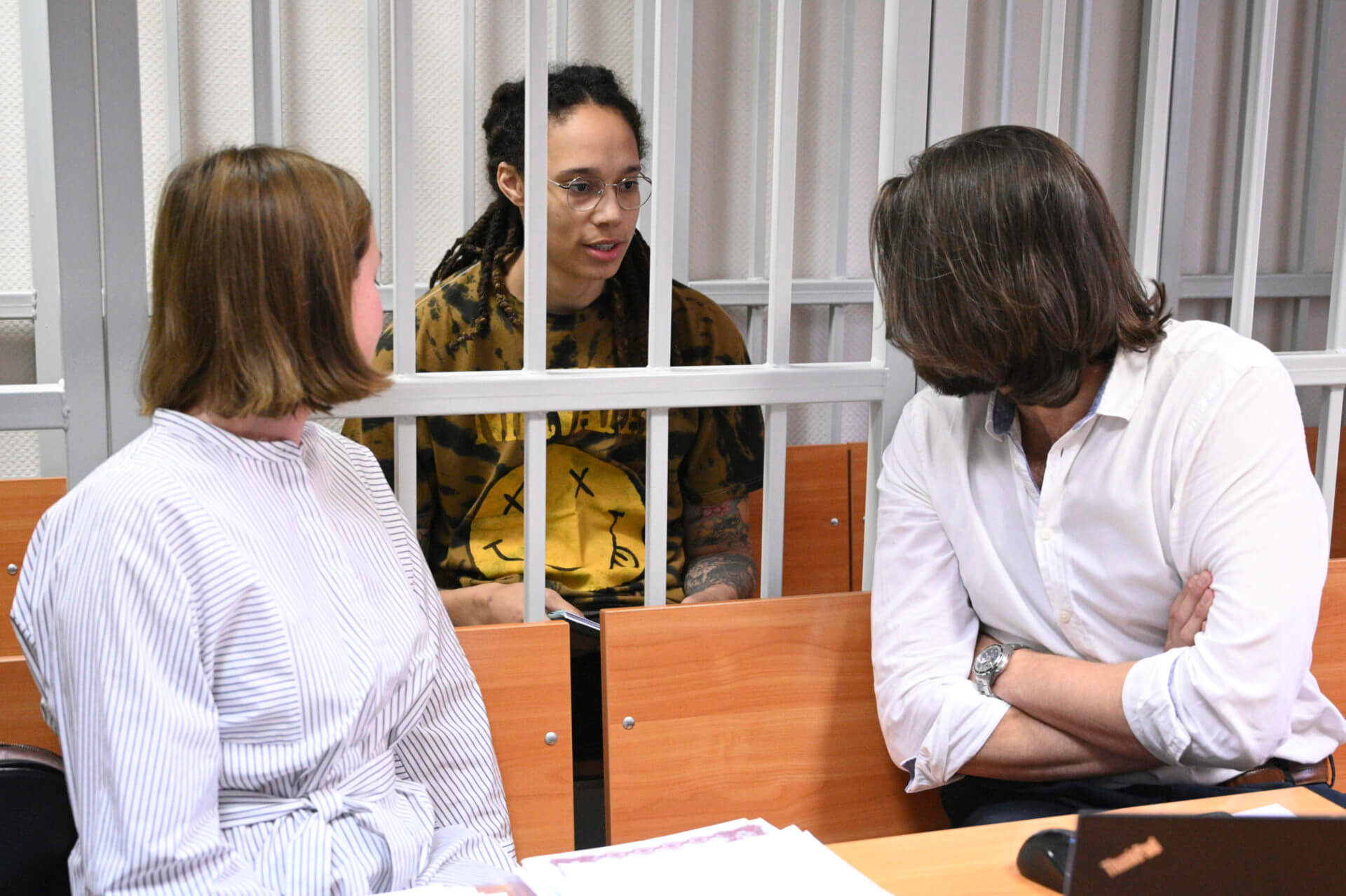 WNBA star and two-time Olympic gold medalist Brittney Griner speaks with her lawyers Alexander Boykov, right, and Maria Blagovolina at a court room prior to a hearing in the Khimki district court, just outside Moscow, Russia, Friday, July 15, 2022. Griner was arrested in February at the Russian capital's Sheremetyevo Airport when customs officials said they found vape canisters with cannabis oil in her luggage. She has been jailed since then, facing up to 10 years in prison if convicted. (AP Photo/Dmitry Serebryakov)
MORE NEWS