BOSTON (AP) — Harvard University is not required to pay legal defense fees for a professor who was found guilty of hiding his ties to a Chinese-run recruitment program, Massachusetts’ highest court ruled Monday.

In its decision, the Supreme Judicial Court found that Harvard was acting within its “broad statutory authority” when it refused to provide upfront payment to cover defense costs for Charles Lieber, a former chair of the school’s department of chemistry and chemical biology. 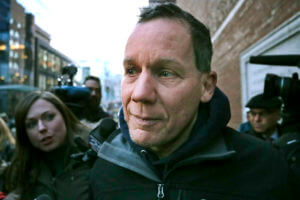 FILE – Harvard University professor Charles Lieber departs federal court, in Boston, Jan. 30, 2020, following his arrest on allegations he hid his involvement in a program designed to recruit people with knowledge of foreign technology and intellectual property to China. Jury selection is slated to start Tuesday, Dec. 14, 2021, in the trial of Lieber, the former chair of Harvard’s department of chemistry and chemical biology. (AP Photo/Charles Krupa, File)

Lieber was found guilty in December of filing false tax returns, making false statements and failing to file reports for a foreign bank account in China.

Prosecutors say Lieber lied to U.S. authorities to hide his involvement with China’s Thousand Talents Plan, a program designed to recruit people with knowledge of foreign technology and intellectual property to China. He was also accused of hiding income, including $50,000 a month from a Chinese university.

Lieber sued Harvard in October 2020 after the Ivy League school denied his request for advance payment to help mount his legal defense.
A Harvard policy offers to pay defense costs for certain workers who face legal action in the course of their work, but it gives university officials flexibility in deciding whether to grant the money.

In Lieber’s case, Harvard concluded that some of the allegations fell outside the scope of his job. An official also found that Lieber had probably lied about his ties to China, which violated Harvard policies, according to the Supreme Judicial Court decision.

After a Superior Court judge sided with Harvard and denied Lieber’s request for immediate payment, Lieber appealed to the state’s highest court. But Monday’s decision supported the earlier ruling and concluded that Harvard was within its rights to reject Lieber’s request.

The court cited a Massachusetts law that says nonprofit organizations are “authorized, but not required” to cover legal defense fees for workers.

“Harvard has taken that authority and adopted an indemnification policy that affords it a fair amount of discretion when it comes to making certain determinations,” the court found.

It added Lieber “failed altogether to establish that it violates public policy.”

Harvard and a lawyer for Lieber did not immediately respond to requests for comment.