INVERNESS, Fla. (AP) — Two white Florida men have been charged with a federal hate crime for allegedly beating a Black man in a store parking lot while yelling racial slurs.

Roy Lashley, 55, and Robert Lashley, 52, were indicted by a grand jury, the U.S. Justice Department said in a news release Friday. 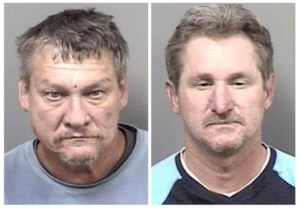 The pair had already been charged with assault and battery under state law for the November attack of the Black man in the parking lot of a Family Dollar store in Citrus County, which is north of the Tampa area.

Federal court records did not list an attorney for either man. It was not clear how or if they are related.

According to arrest records, the victim — identified only by the initials D.B. — said he was walking away from the store when someone began yelling racial slurs. Investigators say Robert Lashley ran toward D.B. and began hitting him in the face.

Roy Lashley then allegedly struck D.B. several times with an ax handle as the Black man lay on the ground. Roy Lashley also got into a confrontation with arresting deputies, which led to charges of resisting law enforcement, according to the arrest records.

Federal hate crime charges carry a maximum 10-year prison sentence and a fine of up to $250,000.