WASHINGTON (AP) — The House committee investigating the Jan. 6 insurrection at the U.S. Capitol is asking social media and telecommunications companies to preserve phone or computer records for hundreds of people who were potentially involved with efforts to “challenge, delay or interfere” with the certification that day of President Joe Biden’s victory or otherwise try to overturn the results of the 2020 election.

In a letter Monday to 35 companies, the committee’s Democratic chairman asks for the preservation “of records relating to certain individuals who hold or have held accounts with your company” from April 2020 through Jan. 31, 2021. The committee did not release the list of individuals targeted, but it includes former President Donald Trump, members of his family and several of his Republican allies in Congress, according to a person familiar with the confidential request who requested anonymity to discuss it. 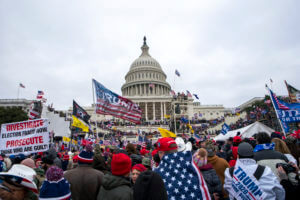 FILE – In this Jan. 6, 2021, file photo insurrections loyal to President Donald Trump rally at the U.S. Capitol in Washington. The House committee investigating the Jan. 6 insurrection at the Capitol is asking social media and telecommunications companies to preserve phone or computer records for hundreds of people who were potentially involved with planning to “challenge, delay or interfere” with the certification of President Joe Biden’s victory. (AP Photo/Jose Luis Magana, File)

“The Select Committee seeks the preservation of these records as part of its examination of the violent attack on the Capitol and the broader context of efforts to delay or interfere with the peaceful transfer of power following the 2020 election,” Chairman Bennie Thompson of Mississippi wrote in the letters to the companies, which range from cell phone giants AT&T and Verizon to social media outlets like Facebook, Twitter and TikTok to conservative and far-right platforms Parler, 4chan and theDonald.win.

Thompson said last week that the committee would be requesting the records preservation for “several hundred people” as the committee begins its probe into the insurrection, in which hundreds of Trump’s supporters seeking to overturn the election stormed the Capitol, brutally beat police, broke through windows and doors and sent lawmakers running for their lives. The letters do not ask the companies to turn over the records, though the committee could do so in the future.

The letters are the third such request as the committee gathers information on the origins of the riot and the details of what happened that day. The probe could take months or even years, as the Democrat-led panel conducts interviews, holds public hearings and prepares a comprehensive report on how the mob was able to infiltrate the Capitol and interrupt the certification of Biden’s presidential victory. It was the most serious assault on Congress in two centuries.

Among the hundreds of names are Trump’s and those of several family members, including his children Donald Jr., Ivanka and Eric, according to the person familiar with the request. Also on the list are several of Trump’s most ardent Republican allies in Congress, including GOP Reps. Mo Brooks of Alabama, Jim Jordan of Ohio, Andy Biggs of Arizona, Paul Gosar of Arizona, Matt Gaetz of Florida, Jody Hice of Georgia, Marjorie Taylor Greene of Georgia, Louie Gohmert of Texas, Scott Perry of Pennsylvania, Lauren Boebert of Colorado and Madison Cawthorn of North Carolina.

Several of those House members spoke to Trump as the rioting was unfolding. Their names were first reported by CNN as on the committee’s list.

Thompson wrote in the letter that the individuals listed “may have relevant information to aid the factfinding of the Select Committee,” but notes that inclusion on the list “should not be viewed as indicative of any wrongdoing by that person or others.”

The panel also asks the companies to preserve information about individuals who have been charged with crimes associated with the Jan. 6 attack and those who were listed on permit applications for Trump’s rally immediately preceding the siege or were otherwise involved in “organizing, funding or speaking” at rallies of Trump supporters on Jan. 5 and Jan. 6.

The request comes after the panel demanded a trove of records from federal intelligence and law enforcement agencies last week. The committee also asked 15 social media companies to provide copies of any reviews, studies, reports or analysis about misinformation related to the 2020 election, foreign influence in the election, efforts to stop the election certification and “domestic violent extremists” associated with efforts to overturn the 2020 election, including the attack on the Capitol.

Republicans in the House have objected to most all of the committee’s work as partisan, and GOP leader Kevin McCarthy pulled five of his members off the panel after House Speaker Nancy Pelosi rejected two of them. Republican Reps. Liz Cheney of Wyoming and Adam Kinzinger of Illinois, both of whom have repeatedly criticized Trump and his lies about election fraud, still joined the committee despite McCarthy’s disapproval.

The panel has so far held one hearing with police officers who fought the insurrectionists at the Capitol on Jan. 6. In emotional testimony, those officers spoke of the brutal assault and how frustrated they were by Republicans who have attempted to downplay the seriousness of the attack.

At least nine people who were at the Capitol that day died during or after the rioting, including a woman who was shot and killed by police as she tried to break into the House chamber and three other Trump supporters who suffered medical emergencies. Two police officers died by suicide in the days that immediately followed, and a third officer, Capitol Police Officer Brian Sicknick, collapsed and died after engaging with the protesters. A medical examiner later determined that Sicknick died of natural causes.

Earlier this summer, the Metropolitan Police announced that two more of their officers who had responded to the insurrection had died by suicide. Officer Kyle DeFreytag was found dead on July 10 and Officer Gunther Hashida was found dead in his home weeks later. The circumstances that led to their deaths are unknown.