By KATHLEEN FOODY The Associated Press

CHICAGO (AP) — The family of an Illinois man whose death prompted murder charges against two paramedics who strapped him facedown on a stretcher has filed a lawsuit against them and their employer, attorneys said Thursday. 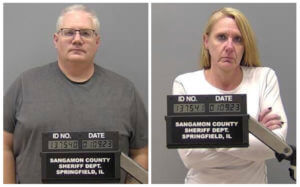 This combination of photos provided by the Sangamon County Sheriff’s Dept. shows Peter J. Cadigan, left, and Peggy Jill Finley on Jan. 9, 2023, in Springfield, Ill. The two paramedics face first-degree murder charges, accused of strapping a patient facedown on a stretcher while taking him to a hospital in response to police concerns. Illinois authorities announced the charges on Jan. 10, 2023, nearly a month after Earl L. Moore died on Dec. 18. (Sangamon County Sheriff’s Dept. via AP)

“We saw it with so many tragedies in America,” Crump said, referencing killings of Black men by police, including George Floyd. “It’s just so tragic that now this pattern seems to be spilling over to the first responders, to the EMTs. When you look at that video, the reason it’s so shocking is because they offer Earl no consideration.”

Prosecutors have separately charged Cadigan and Finley with first-degree murder, accusing them of tightly strapping Moore on a stretcher after Springfield police who initially responded to a 911 call at Moore’s home requested an ambulance. Under Illinois law, a first-degree murder charge can be filed when a defendant “knows that such acts create a strong probability of death or great bodily harm.”

Moore’s mother, Rose Washington, said losing her only son has been unimaginably painful.

“They tied him down like some kind of animal and killed him,” she said. “My baby suffocated because of their actions.”

Edward Unsell, Cadigan’s attorney, said he had not seen the suit yet but a civil lawsuit had been anticipated. As for the murder charge, Unsell said he doesn’t believe prosecutors have probable cause against Cadigan.

W. Scott Hanken, Finley’s attorney, also called the criminal charge unwarranted, saying, “What happened may be negligent, but it’s not a criminal act and certainly not first-degree murder.”

A woman who answered the phone at LifeStar Ambulance Service’s office and did not provide her name declined to comment.

Experts in emergency medicine have said the Springfield case is a rare instance of prosecutors filing criminal charges against emergency medicine providers. Another prominent example is pending in Colorado, where a grand jury in 2021 indicted two paramedics along with three police officers for manslaughter and other charges in the death of a Black man, Elijah McClain.

Cadigan and Finley remain in the Sangamon County jail on $1 million bond each. They appeared via video for a brief court appearance Thursday, but no additional details of the case were discussed. They were scheduled to appear again Friday morning.

After Sangamon County prosecutors filed the charges this month, Springfield police released the videos which show a woman inside Moore’s home telling police that he is in withdrawal from alcohol and hallucinating. Police then call for an ambulance.

When Finley arrives she enters the bedroom, where Moore is on the floor. Soon after, she yells at him to sit up and asks repeatedly for his birth date.

“You’re gonna have to walk cause we ain’t carrying you,” she adds.

Once outside the house, the video shows Cadigan forcefully putting Moore onto his stomach on the stretcher and both paramedics tightening straps across his back.

Springfield Police Chief Ken Scarlette has said he asked Illinois State Police to investigate after learning that Moore died after arriving at the hospital. An autopsy report listed Moore’s cause of death as homicide by compressional and positional asphyxia.