WATERBURY, Conn. (AP) — A sister of a teacher killed in the 2012 Sandy Hook massacre and an FBI agent who responded to the school shooting became overwhelmed with emotion Tuesday as they described what it has been like to be accused of being crisis actors by conspiracy theorist Alex Jones and others.

Carlee Soto Parisi and FBI agent William Aldenberg were the first witnesses to testify as a Connecticut jury began hearing evidence in a trial to decide how much money Jones owes for spreading the lie that the 2012 mass shooting in Newtown that killed 20 first graders and six educators didn’t happen.

Soto Parisi said she has been hounded, both in Connecticut and after she moved to North Carolina, by those who believe she was acting. Some of the hoax believers went online and posted photos of grieving women, including an Associated Press photo of a distraught Soto Parisi outside Sandy Hook Elementary School after the shooting, saying they were the same actor.

“I frequently got threatening emails and messages on all social media,” she testified, crying at times. “And it got to a point where they would use the gun emoji. And I spoke with cops in Connecticut and my husband ended up having to speak with cops in North Carolina, because we were scared for our lives.”

Aldenberg also broke down as he described being among the first law enforcement officers to enter the two classrooms where 20 children died. He described watching as the phone next to Vicki Soto’s body lit up with messages from those trying to reach her. 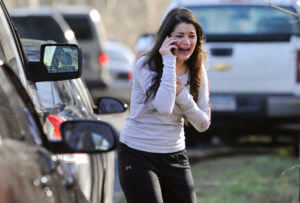 FILE – Carlee Soto uses a phone to get information about her sister, Victoria Soto, a teacher at the Sandy Hook elementary school in Newtown, Conn., after a gunman killed over two dozen people, including 20 children, on Dec. 14, 2012. An FBI agent struggled to control his emotions Tuesday, Sept. 13, 2022, as he described on the witness stand seeing bodies inside Sandy Hook elementary school — a scene that the conspiracy theorist Alex Jones later claimed was staged by actors. (AP Photo/Jessica Hill, File)

“Was what you saw in that school fake?” asked attorney Christopher Mattei, a lawyer for the plaintiffs.

He also testified about how he and others in the community and law enforcement were targeted with threats and conspiracy theories, including one that claimed he was an actor who also pretended to be the father of a victim.

The trial in Waterbury, less than 20 miles (32 kilometers) from Newtown, was attended by more than a dozen family members of victims, including David Wheeler, the father who conspiracy theorists had claimed was the same person as Aldenberg. Wheeler nodded his head as Aldenberg apologized for what Wheeler had to endure because of their resemblance.

Jones did not attend the trial on Tuesday. He is expected in court next week. Jones and his Infowars brand are based in Austin, Texas.

The Sandy Hook families and Aldenberg say they have been confronted and harassed for years by people who believed Jones’ false claim that the shooting was staged by crisis actors as part of a plot to take away people’s guns.

Some say strangers have videotaped them and their surviving children. They’ve also endured death threats and been subjected to abusive comments on social media. And some families have moved out of Newtown to avoid harassment. They accuse Jones of causing them emotional and psychological harm.

“You know, you can say whatever you want about me, I don’t care,” Aldenberg said. “Just say what you want. I’m a frigging big boy. I can take it. But then they want to make profits, they want to make millions and millions of dollars. They want to destroy people’s lives. Their children got slaughtered. I saw it myself, and now they have to sit here and listen to me say this.”

It’s the second such trial for Jones, who was ordered by a Texas jury last month to pay nearly $50 million to the parents of one of the slain children. Jones was not at the trial Tuesday and is expected to attend next week. 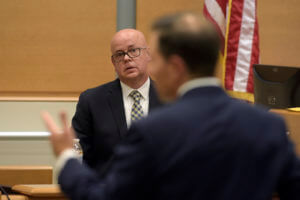 should pay relatives of eight victims and Aldenberg. Judge Barbara Bellis found Jones liable for damages without a trial last year after he failed to turn over documents to the families’ lawyers.

The judge also sanctioned Jones on Tuesday for failing to turn over analytic data related to his website and the popularity of his show. She told his lawyers that because of that failure, they will not be allowed to argue he didn’t profit from his Sandy Hook remarks.

In opening statements, Jones was described by Mattei as a bully and by his own attorney as a crank in a town square who should be ignored.

Mattei showed jurors data indicating how Jones’ audience increased as he spread lies about the shooting. He also showed them photos and videos of things Jones had said, and told the panel they already had the tools from their own life experiences to decide what to do in this case.

“What your parents taught you, what your grandparents taught you to know the difference between right and wrong, to know the difference between the truth and a horrible lie, to know the importance of standing up to bullies when they prey on people who are helpless and profit from them and to know unless you stop a bully, a bully will never stop,” he said. “And when it comes to stopping Alex Jones, that will be the most important work that you do.”

Jones’ attorney, Norm Pattis, argued that his client has espoused a number of conspiracy theories over the years, something he has a Constitutional right to do.

“At what point do we regard him as a crank on the village green, a person we can walk away from if we choose?” he asked.

Pattis told the jury that although Jones is liable for damages, any award should be minimal and alleged the families were overstating the harm they say Jones caused them.

On his Infowars web show on Tuesday, Jones portrayed himself as the victim of unfair show trials.

“How am I handling it? We’re at war. This is total tyranny,” he said. “I’ll tell you this, we can appeal this for years. We can beat this.”

The trial is expected to last about a month and feature testimony from more victims’ relatives. Jones also will be testifying, Pattis said.

Jones now says he believes the shooting was real. At the Texas trial, he testified that he realizes what he said was irresponsible, did hurt people’s feelings and he apologized. He continues, however, to insist that his comments were protected free speech. He views the lawsuits as efforts to silence him and put him out of business.

Jones’ lawyers say he intends to appeal the judgment against him in Texas. Jones also will face a third trial back in Texas involving the parents of another slain child. 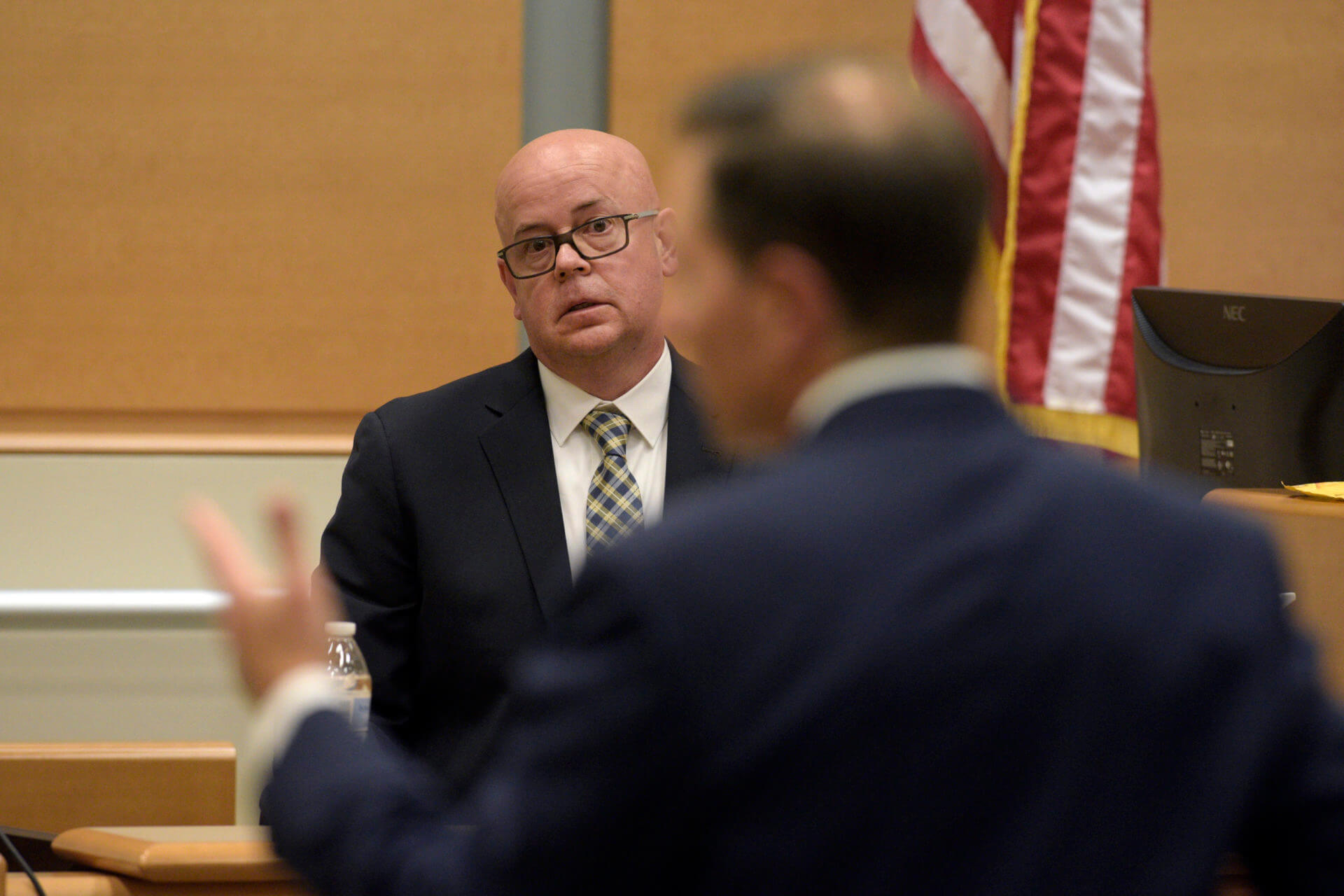