BARTHOLOMEW COUNTY, Ind. (WRTV) — An Indiana man is facing one count of murder after his girlfriend was found buried in a shallow grave earlier this month.

37-year-old Heather Steuver was reported missing by her mother on August 26. Later that day, Steuver’s mother found blood in the bedroom shared by Steuver and her boyfriend, Patrick Doyle, 38. 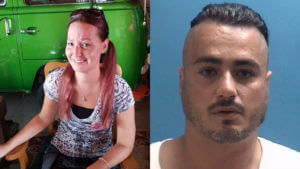 According to the probable cause affidavit, on September 9, Doyle told an investigator he woke up on August 22 and found Steuver dead next to him. He said there was blood on himself and injuries to Steuver’s face.

“Patrick was adamant that he had physically caused Heather’s death but he was unsure how he did so because he was intoxicated at the time,” the affidavit read.

Doyle then told authorities he took Steuver’s body to the company where he worked and covered her body with rocks. He also put her belongings in a pillowcase and threw them into a lake on the property.

Steuver’s death was ruled a homicide by Bartholomew County Coroner Clayton Nolting, with the cause of death being blunt force trauma to the head.

This story was originally published September 15, 2021, by WRTV in Indianapolis, an E.W. Scripps Company.