INDIANAPOLIS (AP) — A 22-year-old Indiana man was charged Thursday with murder in the fatal shooting of a Dutch soldier and the wounding of two others in downtown Indianapolis. 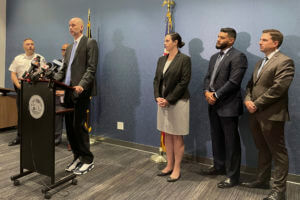 The soldiers had been training at a southern Indiana military camp and were on a night off in Indianapolis when they clashed with Duncan and his friends, according to an arrest affidavit. The affidavit also says Duncan told one of his friends that he opened fire on the soldiers because he “just spazzed.”

The soldier who was killed has been identified as Simmie Poetsema, a 26-year-old member of the Dutch Commando Corps.

One of the wounded soldiers has returned to the Netherlands and the other is expected to return Thursday, Deputy Police Chief Kendale Adams said, adding that both are expected to make a full recovery,

Mears and Adams also said they were in contact with Dutch investigators who are in Indianapolis conducting an independent inquiry into the shooting.

“We’ve been in constant contact with them in terms of what they need,” Adams said. “That will continue to go forward even after today.” 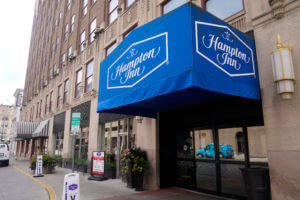 The Hampton Inn photographed, Monday, Aug. 29, 2022, in Indianapolis. Three members of the Dutch Commando Corps, who were training at a center, were shot outside of the hotel in downtown Indianapolis early Saturday morning. The Dutch Defense Ministry says that one has died. (AP Photo/Darron Cummings)

“We do many trainings of our servicemen in the United States, and we really don’t expect this to happen. So it’s very, very concerning for us.” Ollongren told The Associated Press Tuesday at a meeting of European Union defense ministers in Prague.

During a court hearing Thursday, a judge ordered Duncan to remain jailed without bond and entered an automatic not guilty plea on his behalf. The Indianapolis resident has been in custody since his arrest on Tuesday.

Duncan’s lawyers said they are reviewing the allegations.

“Always remember, there are two sides to a story,” defense attorney KiKi Gaither told The Associated Press. “Clearly things got out of control. And it all comes down to, you know, who you believe.”

According to the affidavit, soldiers told investigators they were walking back to their hotel from a bar when Duncan and his friends bumped into them. Witnesses told police that the soldiers tried to defuse the situation but that a brief fight broke out before the gunshots were fired from a passing pickup truck.

“Today’s announcement sends a clear message that if you irresponsibly discharge a firearm and injure or kill someone, it’s not acceptable,” Adams said.

Mears said Duncan has no criminal convictions that would make it illegal for him to carry a gun in Indiana and that others who were with him at the time could still face criminal charges.

“I hope no one interprets this as the end of the investigation or that other additional charges against other individuals will not be filed in the future,” Mears said. “We are continuing to evaluate everybody’s conduct involved.”