WASHINGTON (AP) — The host of a program for the right-wing website Infowars, Owen Shroyer, is in custody after being charged in the Jan. 6 riot at the U.S. Capitol, officials said Monday.

Shroyer, who hosts “The War Room With Owen Shroyer” for the website operated by conspiracy theorist Alex Jones, said on air Friday that he had to turn himself in to authorities Monday morning to face misdemeanor charges stemming from Jan. 6. 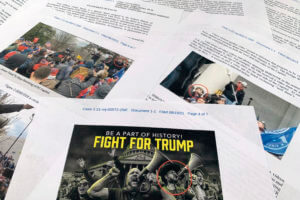 This complaint supporting the arrest warrant for Owen Shroyer is photographed in Frederick, Md., Friday, Aug. 20, 2021. Court documents show that a host of the right-wing website Infowars, Owen Shroyer, has been charged in connection to the Jan. 6 riot at the U.S. Capitol. Shroyer, who hosts “The War Room With Owen Shroyer” on the website operated by conspiracy theorist Alex Jones, faces misdemeanor charges such as disorderly conduct and entering a restricted area of Capitol grounds. (AP Photo/Jon Elswick)

He was scheduled to appear in federal court in Texas later Monday. Shroyer said in a video posted Sunday that he is “obviously completely innocent of the charges.”

“Quite frankly, I’m confused,” he said. “I’m confused at the allegations and the charges.”

Shroyer said he was at the Capitol “as a journalist” and there was “never any intent to disrupt anything.”

Shroyer is charged with crimes including disorderly conduct and entering a restricted area of Capitol grounds. He was seen on the west side of the Capitol next to the inauguration stage as well as at the top of the stairs on the east side of the Capitol, according to court documents. He is not accused of going into the Capitol building.

Shroyer was outspoken in advance of Jan. 6 about wanting to stop the certification of President Joe Biden’s victory, authorities said.

During an address at Freedom Plaza the day before the insurrection, he said, according to the court papers: “Americans are ready to fight. We’re not exactly sure what that’s going to look like perhaps in a couple of weeks if we can’t stop this certification of the fraudulent election … we are the new revolution! We are going to restore and we are going to save the republic!”