LOS ANGELES (AP) — A crewman injured while escaping the fire that killed 34 people aboard a dive boat off Southern California sued the vessel’s owner and the company that chartered it. 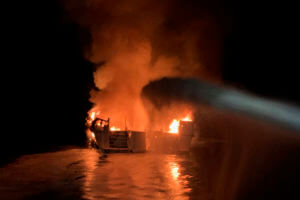 FILE – In this Sept. 2, 2019, file photo, provided by the Ventura County Fire Department, VCFD firefighters respond to a boat fire off the coast of southern California. A crewman injured in the fire that killed 34 people aboard a dive boat off Southern California has sued the boat owner and the company that chartered the vessel. Ryan Sims filed the lawsuit last week in Ventura County Superior Court saying the Conception dive boat was unseaworthy and operated in an unsafe manner. (Ventura County Fire Department via AP, File)

Ryan Sims filed the lawsuit last week in Ventura County Superior Court saying the boat was unseaworthy and operated in an unsafe manner.

Sims had only worked on the boat three weeks as a cook when he was awakened by loud noises before dawn Sept. 2 and found himself trying to get away from fast-moving flames.

Sims jumped from the upper deck, where he and other crew members had been sleeping, down to the main deck, breaking his leg in three places, and hurting his back and neck. He managed to get in the water, where he was eventually rescued by a fellow crew member.

Attorney Kurt Arnold, who represents Sims, said it was a terrifying experience, and his client is now in a wheelchair.

“The worst thing you can imagine,” Arnold said. “Jumping in the water in the dark with your leg — you can’t swim — it’s broken. Fire all around you.”

The lawsuit names the owners of the boat, Truth Aquatics Inc., and Worldwide Diving Adventures that chartered the vessel for a three-day scuba trip as defendants.

The lawsuit is the first known to seek damages in the Labor Day disaster that killed 33 passengers and one crew member. All the dead were sleeping in a bunk room below deck when the fire was discovered and reported at 3:14 a.m., authorities said.

While investigations into the cause and possible crimes are underway, a preliminary report by the National Transportation Safety Board said all the surviving crew members were asleep on the upper deck at the time of the fire.

That finding raised questions about why someone wasn’t on night watch, which is required by the Coast Guard.

Arnold said his client didn’t know why there wasn’t a watchman or what the cause of the fire might be. Sims was the steward, in charge of kitchen operations, and was supposed to be sleeping at the time, he said.

“This isn’t just that they didn’t have a night watch,” Arnold said. “The boat is unseaworthy by nature because it caught fire and sank.”

The lawsuit says the boat wasn’t maintained properly, didn’t have adequate safety equipment and staff was not well trained.

Before the lawsuit can be considered in court, Sims will first have to win a round in federal court against a lawsuit Truth Aquatics pre-emptively filed under a pre-Civil War maritime law that shields boat owners from monetary damages in a disaster at sea.

The case puts anyone with a claim against the boat owner — from crew members to families who lost loved ones — on notice that they must challenge the action in federal court. The boat owners have to show they weren’t at fault or knowledgeable about something that would go awry.

The law, which is in effect in some form in countries around the world, was intended to encourage the shipping business but has been widely criticized as being antiquated, said Professor Martin J. Davies, the maritime law director at Tulane University.

Arnold said the 168-year-old law was designed for wooden sailing ships when there was no radar, GPS or radio communications.

Legislation to change the law after the Deepwater Horizon oil blowout in 2010 didn’t make it through Congress, Davies said.

Arnold said he has overcome the law in the Deepwater Horizon case and other cases. He said technology may help because communications recorded between the boat and its owner can show the owner had knowledge of a dangerous situation.

“In today’s world, communications are instant, and the ships and their captains are communicating by email and otherwise with shoreside management,” Arnold said. “It’s not like the old days in 1851 when a ship set sail and you don’t see it for three months.”

Lawyers for the Santa Barbara-based boat company did not respond to emails seeking comment on the lawsuit.

Worldwide Diving Adventures, the Santa Cruz dive charter company that lost its co-founder in the fire, said on its website that it’s not responding to questions while the investigation is ongoing.