NASHVILLE, Tenn. (AP) — An attorney for a death row inmate in Tennessee who cut off his penis shortly after asking to be placed on suicide watch filed a complaint against prison officials Friday.

Kelley Henry filed a motion for a temporary restraining order in Nashville’s Davidson County Chancery Court, asking the judge to declare that the prison’s treatment of Henry Hodges violates his constitutional rights. 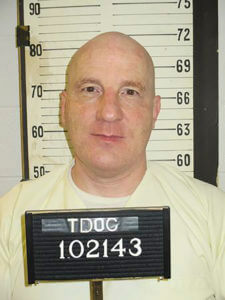 Hodges returned to Riverbend Maximum Security Institution from the hospital on Oct. 21. Since then, he has been held naked in 4-point and 6-point restraints on a thin mattress over a concrete slab, according to the complaint.

On Oct. 7, Hodges broke a window out in his cell and used a razor to slit his left wrist. In the infirmary, he told the treatment provider he needed to go on suicide watch. However, he was returned to the cell with the broken window. Less than an hour later, he severed his penis from his body with a razor blade, according to the complaint.

Hodges was taken to Vanderbilt University Medical Center, where surgeons reattached his penis. Despite holding Hodges’ medical power of attorney, Henry was not allowed to see him during the two weeks he was there.

When he returned to the prison, he was placed naked in restraints in a cell with “no television, radio, or any other means of mental stimulation” that is lit up day and night. He was left to lie in his own defecation and has stopped eating, according to the complaint.

Henry is asking the court to order the Tennessee Department of Correction to release him from his restraints, provide him with clothing, and appoint an independent monitor of his mental and physical health treatment.

Hodges was sentenced to death in 1992 by a Nashville jury that found him guilty of murdering telephone repairman Ronald Bassett in May 1990. He also was sentenced to 40 years in prison for robbing Bassett.

He was convicted of a separate murder in Fulton County, Georgia, for the killing of a North Carolina chemical engineer in an Atlanta hotel, shortly after Bassett’s killing.