WASHINGTON (AP) — Donald Trump’s closest campaign advisers, top government officials and even his family were dismantling his false claims of 2020 election fraud ahead of Jan. 6, but the defeated president seemed “detached from reality” and kept clinging to outlandish theories to stay in power, the committee investigating the Capitol attack was told Monday.

With gripping testimony, the panel is laying out in step-by-step fashion how Trump ignored his own campaign team’s data as one state after another flipped to Joe Biden, and instead latched on to conspiracy theories, court cases and his own declarations of victory rather than having to admit defeat. 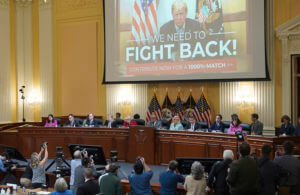 A video of former President Donald Trump speaking is displayed as the House select committee investigating the Jan. 6 attack on the U.S. Capitol continues to reveal its findings of a year-long investigation, at the Capitol in Washington, Monday, June 13, 2022. (Mandel Ngan/Pool via AP)

Trump’s “big lie” of election fraud escalated and transformed into marching orders that summoned supporters to Washington and then sent them to the Capitol on Jan. 6 to block Biden’s victory.

“He’s become detached from reality if he really believes this stuff,” former Attorney General William Barr testified in his interview with the committee.

Barr called the voting fraud claims “bull——,” “bogus” and “idiotic,” and resigned in the aftermath. “I didn’t want to be a part of it.”

The House 1/6 committee spent the morning hearing delving into Trump’s claims of election fraud and the countless ways those around him tried to convince the defeated Republican president they were not true, and he had simply lost the election.

The witnesses Monday, mostly Republicans and many testifying in prerecorded videos, described in blunt terms and sometimes exasperated detail how Trump refused to take the advice of those closest to him, including his family members. As the people around him splintered into a “team normal” headed by former campaign manager Bill Stepien and others led by Trump confidant Rudy Giuliani, the president chose his side. 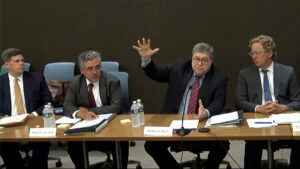 In this image from video released by the House Select Committee, former Attorney General William Barr speaks during a video deposition to the House select committee investigating the Jan. 6 attack on the U.S. Capitol, that was shown as an exhibit at the hearing Monday, June 13, 2022, on Capitol Hill in Washington. (House Select Committee via AP)

On election night, Stepien said, Trump was “growing increasingly unhappy” and refusing to accept the grim outlook for his presidency.

Son-in-law Jared Kushner tried to steer Trump away from Giuliani and his far-flung theories of voter fraud. The president would have none of it.

The back-and-forth intensified in the run-up to Jan. 6. Former Justice Department official Richard Donoghue recalled breaking down one claim after another — from a truckload of ballots in Pennsylvania to a missing suitcase of ballots in Georgia —- and telling Trump “much of the info you’re getting is false.”

Still, he pressed on with his false claims even after dozens of court cases collapsed.

On Monday an unrepentant Trump blasted the hearings in his familiar language as “ridiculous and treasonous” and repeated his claims.

The former president, mulling another run for the White House, defended the Capitol attack as merely Americans seeking “to hold their elected officials accountable.” 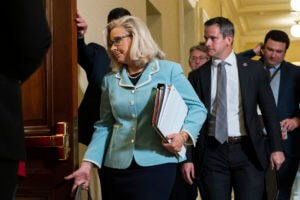 Nine people died in the riot and its aftermath, including a Trump supporter shot and killed by Capitol police. More than 800 people have been arrested, and members of two extremist groups have been indicted on rare sedition charges over their roles leading the charge into the Capitol.

During the hearing, the panel also provided new information about how Trump’s fundraising machine collected some $250 million with his campaigns to “Stop the Steal” and others in the aftermath of the November election, mostly from small-dollar donations from Americans. One plea for cash went out 30 minutes before the Jan. 6, 2021, insurrection.

“Not only was there the big lie, there was the big ripoff,” said Rep. Zoe Lofgren, D-Calif.

Chairman Rep. Bennie Thompson, D-Miss., opened Monday’s hearing saying Trump “betrayed the trust of the American people” and “tried to remain in office when people had voted him out.”

As the hearings play out for the public, they are also being watched by one of the most important viewers, Attorney General Merrick Garland, who must decide whether his department can and should prosecute Trump. No sitting or former president has ever faced such an indictment.

“I am watching,” Garland said Monday at a press briefing at the Justice Department, even if he may not watch all the hearings live. “And I can assure you the Jan. 6 prosecutors are watching all of the hearings as well.”

Stepien was to be a key in-person witness Monday but abruptly backed out of appearing live because his wife went into labor. Stepien, who is still close to Trump, had been subpoenaed to appear. He is now a top campaign adviser to Trump-endorsed House candidate Harriet Hageman, who is challenging committee vice chair Rep. Liz Cheney in the Wyoming Republican primary.

The panel marched ahead after a morning scramble and delay, with witness after witness saying Trump embraced and repeated his claims about the election although those closest told him the theories of stolen ballots or rigged voting machines were simply not true.

Stepien and senior adviser Jason Miller described how the festive mood at the White House on Election Night turned grim as Fox News announced Trump had lost the state of Arizona to Joe Biden, and aides worked to counsel Trump on what to do next.

But he ignored their advice, choosing to listen instead to Giuliani, who was described as inebriated by several witnesses. Giuliani issued a general denial Monday, rejecting “all falsehoods” he said were being said about him.

Stepien said, “My belief, my recommendation was to say that votes were still being counted, it’s too early to tell, too early to call the race.”

But Trump “thought I was wrong. He told me so.”

Barr, who had also testified in last week’s blockbuster opening hearing, said Trump was “as mad as I’d ever seen him” when the attorney general later explained that the Justice Department would not take sides in the election.

For the past year, the committee has been investigating the most violent attack on the Capitol since the War of 1812, which some believe posed a grave threat to democracy.

Monday’s hearing also featured live witnesses, including Chris Stirewalt, a former Fox News Channel political editor who was part of a team that declared on Election Night that Arizona was being won by Biden. Also appearing was the former U.S. attorney in Atlanta, BJay Pak, who abruptly resigned after Trump pressured Georgia Secretary of State Brad Raffensperger to find enough votes to overturn his defeat.

The panel also heard from elections lawyer Benjamin Ginsberg, who discussed the norms of election campaign challenges, and former Philadelphia City Commissioner Al Schmidt, the only Republican on the city’s election board, who told the panel that regardless of how “fantastical” some of the claims that Trump and his team were making, the city officials investigated. He discussed facing threats after Trump criticized him in a tweet. 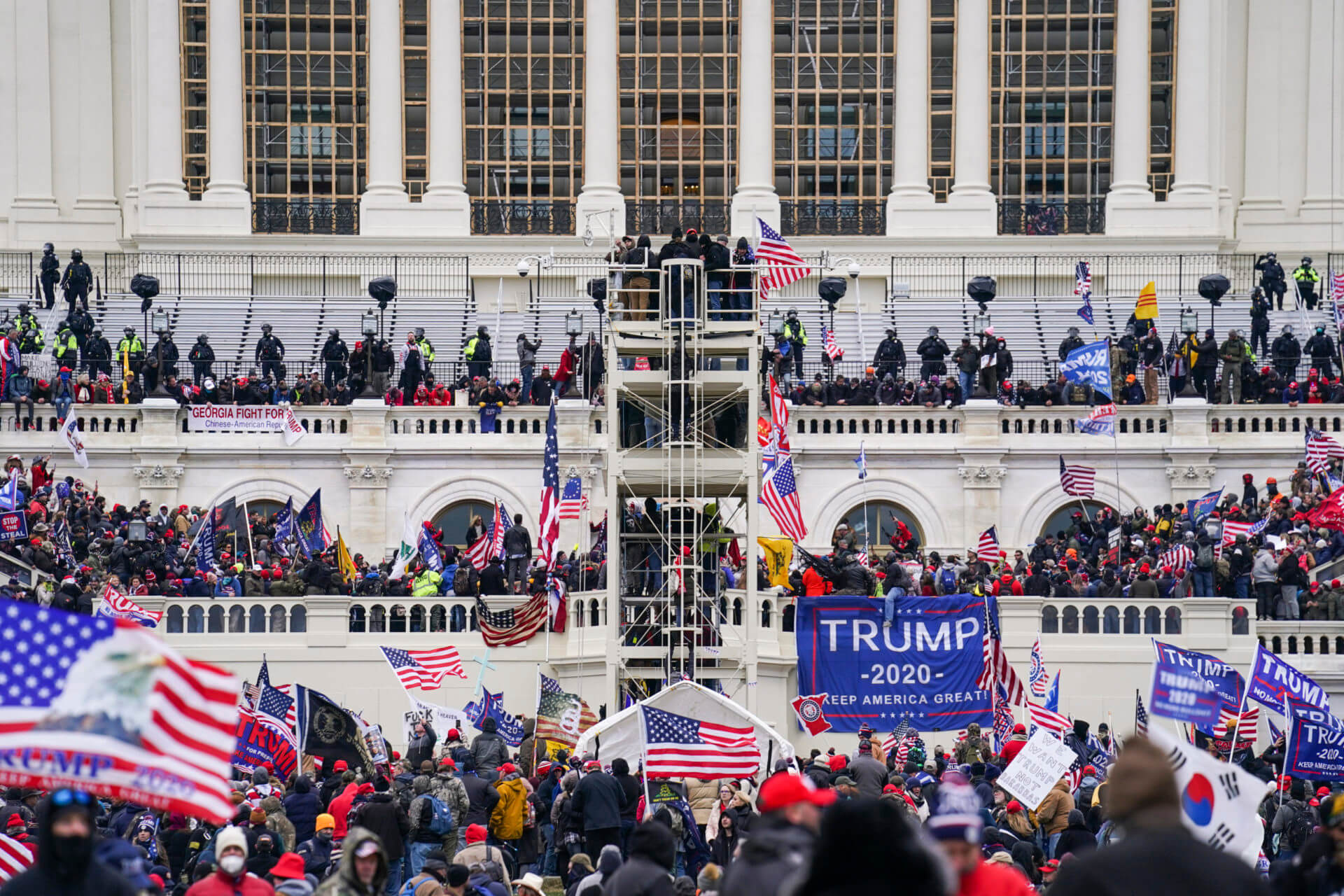 FILE - In this Jan. 6, 2021, file photo insurrectionists loyal to President Donald Trump breach the Capitol in Washington. As the number of people sentenced for crimes in the Capitol insurrection nears 200, an Associated Press analysis of sentencing data shows that some judges are divided over how to punish the rioters, particularly for the low-level misdemeanors arising from the attack. (AP Photo/John Minchillo, File)
MORE NEWS