WASHINGTON (AP) — The House Jan. 6 committee urged the Justice Department on Monday to bring criminal charges against Donald Trump for the violent 2021 Capitol insurrection, calling for accountability for the former president and “a time of reflection and reckoning.”

After one of the most exhaustive and aggressive congressional probes in memory, the panel’s seven Democrats and two Republicans are recommending criminal charges against Trump and associates who helped him launch a wide-ranging pressure campaign to try to overturn his 2020 election loss. The panel also released a lengthy summary of its final report, with findings that Trump engaged in a “multi-part conspiracy” to thwart the will of voters. 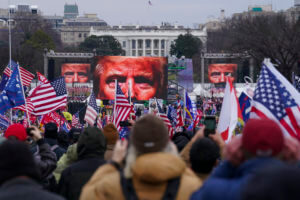 At a final meeting Monday, the committee alleged violations of four criminal statutes by Trump, in both the run-up to the riot and during the insurrection itself, as it recommended the former president for prosecution to the Justice Department. Among the charges they recommend for prosecution is aiding an insurrection — an effort to hold him directly accountable for his supporters who stormed the Capitol that day.

The committee also voted to refer conservative lawyer John Eastman, who devised dubious legal maneuvers aimed at keeping Trump in power, for prosecution on two of the same statutes as Trump: conspiracy to defraud the United States and obstructing an official proceeding.

While a criminal referral is mostly symbolic, with the Justice Department ultimately deciding whether to prosecute Trump or others, it is a decisive end to a probe that had an almost singular focus from the start.

Chairman Bennie Thompson, D-Miss., said Trump “broke the faith” that people have when they cast ballots in a democracy and that the criminal referrals could provide a “roadmap to justice” by using the committee’s work. 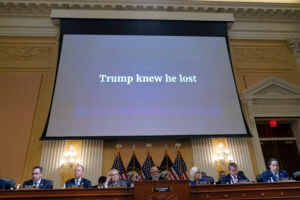 “I believe nearly two years later, this is still a time of reflection and reckoning,” Thompson said. “If we are to survive as a nation of laws and democracy, this can never happen again.”

Wyoming Rep. Liz Cheney, the panel’s Republican vice chairwoman, said in her opening remarks that every president in American history has defended the orderly transfer of power, “except one.”

The committee also voted 9-0 to approve its final report, which will include findings, interview transcripts and legislative recommendations. The full report is expected to be released on Wednesday.

The report’s 154-page summary, made public as the hearing ended, found that Trump engaged in a “multi-part conspiracy” to overturn the election. While the majority of the report’s main findings are not new, it altogether represents one of the most damning portraits of an American president in recent history, laying out in great detail Trump’s broad effort to overturn his own defeat and what the lawmakers say is his direct responsibility for the insurrection of his supporters.

The panel, which will dissolve on Jan. 3 with the new Republican-led House, has conducted more than 1,000 interviews, held 10 well-watched public hearings and collected more than a million documents since it launched in July 2021. As it has gathered the massive trove of evidence, the members have become emboldened in declaring that Trump, a Republican, is to blame for the violent attack on the Capitol by his supporters almost two years ago. 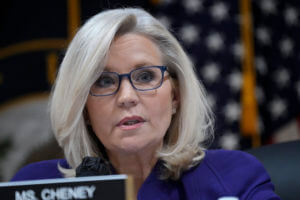 After beating their way past police, injuring many of them, the Jan. 6 rioters stormed the Capitol and interrupted the certification of Biden’s presidential election win, echoing Trump’s lies about widespread election fraud and sending lawmakers and others running for their lives.

The attack came after weeks of Trump’s efforts to overturn his defeat — a campaign that was extensively detailed by the committee in its multiple public hearings, and laid out again by lawmakers on the panel at Monday’s meeting. Many of Trump’s former aides testified about his unprecedented pressure on states, on federal officials and Pence to object to Biden’s win. The committee has also described in great detail how Trump riled up the crowd at a rally that morning and then did little to stop his supporters for several hours as he watched the violence unfold on television.

The panel aired some new evidence at the meeting, including a recent interview with longtime Trump aide Hope Hicks. Describing a conversation she had with Trump around that time, she said he told her that no one would care about his legacy if he lost the election.

Hicks told the committee that Trump told her, “The only thing that matters is winning.”

Trump’s campaign did not immediately respond to a request for comment, but the former president slammed members of the committee Sunday as “thugs and scoundrels” as he has continued to falsely dispute his 2020 loss.

While a so-called criminal referral has no real legal standing, it is a forceful statement by the committee and adds to political pressure already on Attorney General Merrick Garland and special counsel Jack Smith, who is conducting an investigation into Jan. 6 and Trump’s actions.

On the recommendation to charge Trump on aiding an insurrection, the committee said in the report’s summary that the former president “was directly responsible for summoning what became a violent mob” and refused repeated entreaties from his aides to condemn the rioters or to encourage them to leave.

For obstructing an official proceeding, the committee cites Trump’s relentless badgering of Vice President Mike Pence and others to prevent the certification of the election results on Jan. 6. And his repeated lies about the election and efforts to undo the results open him up to a charge of conspiracy to defraud the United States, the panel said.

The final charge recommended by the panel is conspiracy to make a false statement, citing the scheme by Trump and his allies to put forward slates of fake electors in battleground states won by President Joe Biden.

Among the other charges contemplated, but not approved, by the committee was seditious conspiracy, the same allegation Justice Department prosecutors have used to target a subset of rioters belonging to far-right groups like the Oath Keepers and Proud Boys.

Thompson said after the hearing that the seditious conspiracy charge is “something that the committee didn’t come to agreement on.”

The panel was formed in the summer of 2021 after Senate Republicans blocked the formation of what would have been a bipartisan, independent commission to investigate the insurrection. When that effort failed, the Democratic-controlled House formed an investigative committee of its own.

House Republican leader Kevin McCarthy of California, a Trump ally, decided not to participate after House Speaker Nancy Pelosi rejected some of his appointments. That left an opening for two anti-Trump Republicans in the House — Reps. Liz Cheney of Wyoming and Adam Kinzinger of Illinois — to join seven Democrats, launching an unusually unified panel in the divided Congress.

McCarthy was one of four House Republicans who ignored congressional subpoenas from the panel and were referred to the House Ethics Committee on Monday for their non-compliance.

The Republican leader, who is hoping to become speaker of the House when his party takes the majority in January, has acknowledged he spoke with Trump on Jan. 6. The committee also referred Reps. Jim Jordan of Ohio, Scott Perry of Pennsylvania and Andy Biggs of Arizona, all of whom were in touch with Trump or the White House in the weeks leading up to the attack.

While the committee’s mission was to take a comprehensive accounting of the insurrection and educate the public about what happened, they’ve also aimed their work at an audience of one: the attorney general. Lawmakers on the panel have openly pressured Garland to investigate Trump’s actions, and last month he appointed a special counsel, Smith, to oversee two probes related to Trump, including those related to the insurrection and the presence of classified documents at Trump’s Florida estate.

The committee members said that full accountability can only be found in the criminal justice system.

“No one should get a pass,” said Rep. Adam Schiff, D-Calif. 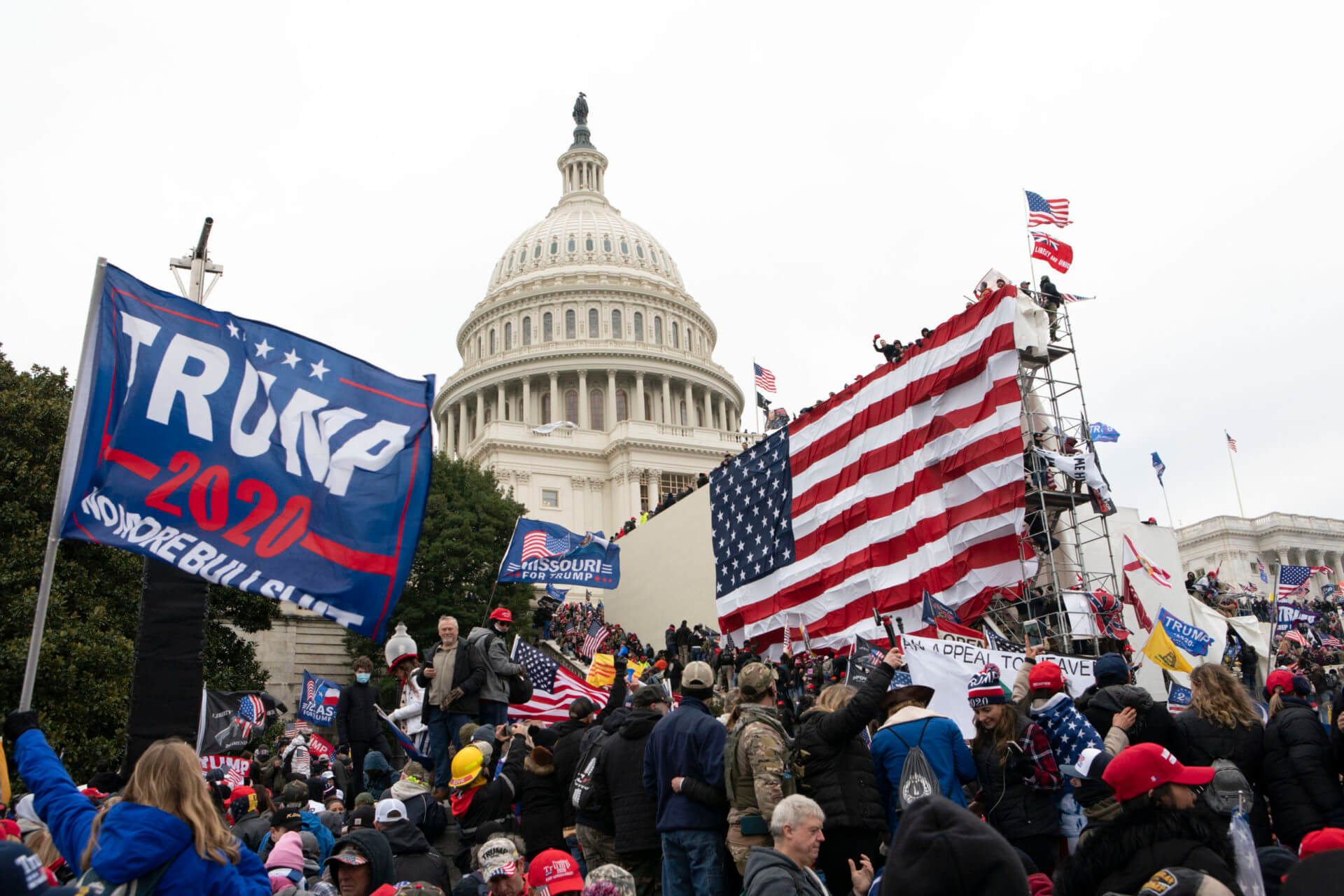