WATERBURY, Conn. (AP) — Alex Jones returned to a Connecticut courthouse Tuesday where he is expected to retake the stand in his defamation trial, as a jury decides how much he should pay for spreading the lie that the 2012 Sandy Hook massacre was a hoax.

Jones is expected to be a defense witness Wednesday as his lawyer begins presenting a case that damages to the families of eight shooting victims and an FBI agents should be minimal. 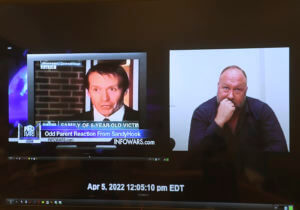 A video of Alex Jones responding to questions about Infowars segments covering the Sandy Hook massacre is presented to the jury panel during Jones’ defamation trial at Superior Court in Waterbury, Conn., on Thursday, Sept. 29, 2022. (Brian A. Pounds/Hearst Connecticut Media via AP, Pool)

Jones already testified last month during the plaintiffs presentation — a contentious appearance in which he called an attorney for the victims families an ambulance chaser.

Jones was found liable last year by default for damages to plaintiffs without a trial, as a consequence of what the judge called his repeated failures to turn over documents to their lawyers. The six-member jury is now deciding how much Jones and Free Speech Systems, Infowars’ parent company, should pay the plaintiffs for defaming them and intentionally inflicting emotional distress.

Outside the courthouse Tuesday, Jones once again told reporters that the trial was rigged and the default ruling was a lie. That led to a discussion inside the courtroom about what Jones will be allowed to say on the witness stand, and how he will be instructed by the judge.

On his Infowars show, Jones has been airing commercials for products in his online store that show him on the stand, giving the web address where people can purchase coins, cryptocurrency and other things. He’s also been asking his viewers to help him raise $500,000 for his legal defense.

The trial is being held in Waterbury, about 20 miles (32 kilometers) from the site of the school shooting in Newtown.

Francine Wheeler, the mother of victim Ben Wheeler, was the first of three Sandy Hook family members scheduled to take the stand Tuesday as the plaintiffs wrapped up their presentation.

She was one of more than a dozen victim family members who have given often emotional testimony detailing death and rape threats, mail from conspiracy theorists that included photos of dead children, and in-person confrontations with people telling them their children or wives or mothers never existed.

Wheeler recounted an exchange with another shooting victim’s mother at a conference on gun violence in which that woman called her a liar.

She told the jury it has been hard enough to live with the death of her son.

“It’s quite another thing when people take everything about your boy, who is gone, and your surviving child and your husband and everything you ever did in your life that is on the Internet and harass you and make fun of you,” she said.

Relatives said the harassment has not stopped, despite nearly 10 years having passed since the shooting.

Jones’ lawyer, Norman Pattis, is trying to limit any damages the jury awards. In cross-examining witnesses, he has tried to show that Jones wasn’t directly linked to many instances of harassment and threats, and he has accused the victims’ relatives of exaggerating.

Jones in recent years has acknowledged the shooting happened, but claims the families are being used to push a gun-control and anti-free speech agenda. He also believes free speech rights allow him to question whether events, like the Sandy Hook shooting, actually happened.