DENVER (AP) — A Colorado woman convicted of plotting to kidnap her son from foster care after associating with supporters of the Qanon conspiracy theory was sentenced Thursday to 60 days in jail and two years of supervised probation, after being reprimanded by the judge for a lack of remorse.

Given a chance to speak and take responsibility, Cynthia Abcug, 53, instead said she was glad her son was doing well and asked District Judge Patricia Herron to give her probation so she could continue getting therapy, working and studying for a law degree. 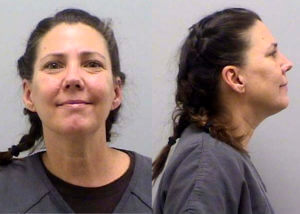 FILE – This undated booking photo provided by the Douglas County Sheriff’s Office, in Colorado, shows Cynthia Abcug. The Colorado mother accused of plotting to kidnap her son from foster care after her teen daughter said she started associating with supporters of the QAnon conspiracy theory was found guilty of conspiracy to commit second-degree kidnapping on Friday, Aug. 26, 2022. (Douglas County Sheriff’s Office via AP, File)

That drew a strong rebuke from Herron. who said Abcug still sees herself as a victim and could pose a danger again because of that mindset.

“I don’t hear a single word from you on the impact you had on the foster family by putting that plan in place,” said Herron, noting that the lack of accountability could be because of legal appeals she is pursuing.

Herron added that she did not find Abcug’s testimony at the August trial credible. In her testimony, Abcug denied she was involved in planning a raid on the foster home where her then 7-year-old son lived in the fall of 2019. She had lost custody of him earlier that year after being accused of medical child abuse — allegedly lying about him having seizures and other health problems in order to trick doctors into providing unnecessary care.

A jury convicted her of misdemeanor child abuse because of those allegations as well as conspiracy to commit second-degree kidnapping.

Prosecutors said the boy, now 10, hasn’t experienced any serious health problems since being taken away from Abcug.

The boy’s foster mother, Julia Plotke, said the boy will be dealing with the trauma caused by how he was treated for the rest of his life. In addition, after authorities were tipped off to the plot, police escorted her to pick up the boy and her other children at school and they had to stay in a hotel for weeks, she said.

“I don’t think 60 days will come close to dealing with what we have to deal with,” said Plotke, who added that she believes the risk to her family continues.

Herron called baseless a previous claim by Abcug that social workers were getting millions of dollars to take children from their homes and that the child welfare system was “broken.” She said the truth was they were trying to help Abcug’s son.

Herron said she wanted to sentence Abcug to prison but decided against it because it might actually lead to her getting released faster and without strict conditions of supervision once she is out since the kidnapping plot, which wasn’t carried out, isn’t considered a violent crime.

If Abcug fails to show up to start her jail term next week or complete her probation, Herron’s sentence would then allow Abcug to be sent to prison.

During trial, Abcug testified that after her son was removed in May 2019 she was extremely anxious and reached out on social media for help in getting her son back. She told jurors she ended up meeting members of a group that said it was working on reforming the family court system and offered to help her get her son back legally. She said it turned out to be a scam with members interested in stealing money raised online to help parents who had lost custody of their children.

She did not describe the group as being involved with QAnon but said she heard references to the conspiracy theory by people she met through her activism online.

The conspiracy theory was not a main issue in the trial, which focused more on detailed testimony from medical providers and educators about Abcug son’s medical history.