Manhattan Judge Alvin K. Hellerstein ruled that the Boy Scouts of America can describe their activities as “scouting” without referring to gender and that the matter does not need to be put to a jury. 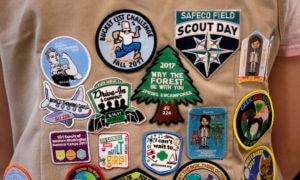 FILE – Patches cover the back of a Girl Scout’s vest at a demonstration of some of their activities in Seattle, June 18, 2018. A federal judge, Thursday, April 7, 2022, tossed out a lawsuit in which the Girl Scouts claim that the Boy Scouts are creating marketplace confusion and damaging their recruitment efforts through their use of words such as “scouts” and “scouting.” (AP Photo/Elaine Thompson, File)

Hellerstein said his written decision caps a “serious, contentious and expensive” litigation and necessitates dismissal of the lawsuit brought by the Girls Scouts of the United States of America.

The lawsuit was filed in late 2018, a year after the Boy Scouts announced that boy scouting and cub scouting would be open to girls, leading the organizations to compete for members after social trends and a rise in sports league participation drove down membership for decades. The pattern worsened when the pandemic hit.

“The Boy Scouts adopted the Scout Terms to describe accurately the co-ed nature of programming, not to confuse or exploit Girl Scouts’ reputation,” Hellerstein wrote. “Such branding is consistent with the scout-formative branding Boy Scouts has used for a century, including in its co-ed programs that have existed since the 1970s.”

The term “scout” is descriptive of both the Boy Scouts’ and Girl Scouts’ programming, the judge wrote.

“The Boy Scouts’ decision to become co-ed, even if it affects Girl Scouts’ operations, does not demonstrate bad faith,” the judge added.

Hellerstein’s decision comes while the Boy Scouts are in bankruptcy proceedings in Delaware that began in February 2020. The Irving, Texas-based organization sought bankruptcy protection after it was named in hundreds of lawsuits brought by individuals claiming they were molested by scout leaders as minors.

Messages seeking comment left with lawyers in the case were not immediately returned.

In his decision, Hellerstein wrote that he was siding with the Boy Scouts in part because the Girls Scouts cannot prove that a likelihood of confusion was caused by the Boy Scouts’ use of the term “scout.”

He said the Girl Scouts had cited instances of parents confusing the two organizations. But he added that the choice to join one organization or the other is made after several interactions with the organization, by children’s desires to join a group siblings or friends have joined, or other factors unrelated to trademarks and branding.