NORFOLK, Va. (AP) — A judge in Virginia dismissed a lawsuit Tuesday that had sought to declare two books as obscene for children and to restrict their distribution to minors, including by booksellers and libraries.

The books in question were “Gender Queer: A Memoir” by Maia Kobabe and “A Court of Mist and Fury” by Sarah J. Maas. 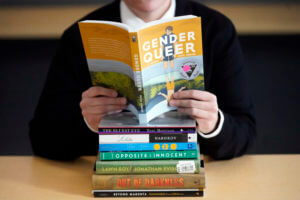 FILE – Amanda Darrow, director of youth, family and education programs at the Utah Pride Center, poses with books that have been the subject of complaints from parents in recent weeks on Thursday, Dec. 16, 2021, in Salt Lake City. A judge in Virginia dismissed a lawsuit Tuesday, Aug. 30, 2022, that sought to declare two books as obscene for children and to restrict their distribution to minors, including by booksellers and libraries. The books in question were “Gender Queer: A Memoir” by Maia Kobabe and “A Court of Mist and Fury” by Sarah J. Maas. (AP Photo/Rick Bowmer)

Both books describe or illustrate sexual acts that prompted the lawsuit. In a petition to the court, Tommy Altman, a Virginia Beach tattoo shop owner and former Republican congressional candidate, said the depictions were inappropriate for children under Virginia’s obscenity law. He asked the court to issue a restraining order against distributing, selling or loaning the books to minors.

The suit was filed in April and dismissed before it could proceed to trial.

For example, Baskervill wrote that Virginia law doesn’t give her the specific authority to determine whether the books are obscene for minors.

The judge also wrote that restricting the books’ distribution would authorize “prior restraint” of speech and violate the First Amendment. The judge also described concerns about prosecuting someone who didn’t know they were selling or loaning books that were deemed to be obscene.

The judge’s order comes at a time when book challenges and bans have surged across the U.S. to levels not seen in decades. And Virginia has been on the frontlines of such conflicts, with public school curricula and books serving as a major prong for Republican Glenn Youngkin’s successful run for governor last year.

Many of the books targeted in schools and libraries have focused on sexuality, gender identity or race. And Kobabe’s “Gender Queer” has served as a particular flashpoint in the debate that continues to unfold across the nation. The Virginia Beach school board removed the book from school libraries earlier this year.

Tim Anderson, Altman’s attorney, said the lawsuit in Virginia Beach was not focused on what the two books were about.

“This was never never about trying to ban gay literature or trans literature,” Anderson said. “This was simply just saying these have really sexual explicit content and it’s not appropriate for kids.”