ATLANTA (AP) — A judge in Atlanta has rejected an appeal by a group of voters and affirmed the Georgia secretary of state’s decision that U.S. Rep. Marjorie Taylor Greene is eligible to run for reelection.

The five voters from Greene’s district sought to have her removed from the ballot, saying that she played a significant role in the Jan. 6, 2021, attack on the U.S. Capitol that disrupted Congress’ certification of Biden’s presidential victory. That was a violation of a rarely invoked provision in the 14th Amendment against insurrection or rebellion, they argued. 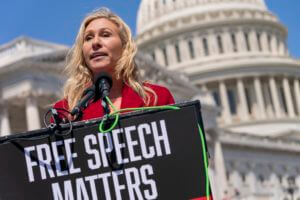 FILE – U.S. Rep. Marjorie Taylor Greene, R-Ga., speaks about Twitter, April 28, 2022, on Capitol Hill in Washington. On Monday July 25, 2022, a judge in Atlanta has rejected an appeal by a group of voters and affirmed the Georgia secretary of state’s decision that U.S. Rep. Marjorie Taylor Greene is eligible to run for reelection. The voters said she played a big role in the Jan. 6, 2021, attack on the U.S. Capitol and was therefore ineligible for reelection. (AP Photo/Jacquelyn Martin, File)

Represented by Free Speech for People, a national election and campaign finance reform group, the voters filed a complaint with Secretary of State Brad Raffensperger in March.

Greene was questioned extensively during a daylong hearing in April before Georgia Administrative Law Judge Charles Beaudrot, who ruled on May 6 that Greene should not be disqualified. Raffensperger immediately affirmed the decision.

Free Speech for People said in a statement that Brasher ruled “with minimal legal analysis,” and that it has not decided whether to appeal to the Georgia Supreme Court.

The challenge to Greene’s eligibility was based on a section of the 14th Amendment that says no one can serve in Congress “who, having previously taken an oath, as a member of Congress … to support the Constitution of the United States, shall have engaged in insurrection or rebellion against the same.”

Ratified shortly after the Civil War, it was meant in part to keep representatives who had fought for the Confederacy from returning to Congress.

Beaudrot found that the voters hadn’t produced sufficient evidence that Greene’s actions before, during and after the Capitol siege encouraged and helped facilitate a violent attack on the U.S. government and democracy in violation of the U.S. Constitution.

Greene won about 70% of the vote in the May Republican primary, easily defeating five challengers who tried to unseat her. She faces Democrat Marcus Flowers in November’s general election.