MINNEAPOLIS (AP) — A judge promised Monday to rule as soon as possible on whether to strike a revised version of a ballot question on the future of policing in Minneapolis in the wake of the death of George Floyd.

The City Council updated the language last Tuesday, just hours after Hennepin County District Judge Jamie Anderson found that the old language was “vague, ambiguous and incapable of implementation” and ordered it off the ballot. The proposal has its roots in the “defund the police” movement, which gained momentum after Floyd’s death in Minneapolis police custody last summer sparked protests, civil unrest and a national reckoning on racial justice. 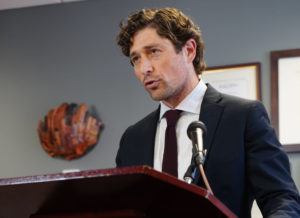 The proposal would remove the city charter’s requirement that Minneapolis have a police department with a minimum staffing level and replace it with a new Department of Public Safety that could have police “if necessary,” and whose functions and funding levels would be defined later by the mayor and City Council.

Joseph Anthony, an attorney for former council member Don Samuels and two other petitioners, told Anderson at a hearing on Monday that the new language still failed to tell voters would will happen if the amendment passed. He said it still wasn’t possible for voters to understand how the proposal would be implemented and whether it defunds the police. He pointed out that proponents disagree among themselves on the extent to which the city would still have police and how the new department would run.

But Terrance Moore, an attorney for the pro-amendment Yes 4 Minneapolis campaign, said the new language meets the requirements set by the Minnesota Supreme Court in a 2012 case that the wording just needs to convey the “essential nature” of the proposal.

Moore said the question should stay on the ballot and be put to voters. He said Minneapolis will continue to have a police department until the City Council decides otherwise.

The charter amendment and the future of policing in the city are among the top issues in the municipal election campaign. While a majority of council members support the measure, Major Jacob Frey opposes it and has tried to keep it off the ballot.

Anderson acknowledged that she needs to rule quickly because early in-person and absentee voting begins on Friday.