MINNEAPOLIS (AP) — Prosecutors at a former Minnesota police officer’s trial in the shooting of Daunte Wright played extensive video of the aftermath, showing jurors images of officers pulling him from his car and attempting lifesaving measures.

Thursday’s testimony at Kim Potter ’s manslaughter trial began with tearful testimony from Wright’s passenger and girlfriend, recounting her screams and how Wright “was just gasping” after he was shot.

A stream of police officers and emergency medical workers followed her to the stand for much of the day, eventually prompting Potter attorney Paul Engh to seek a mistrial on the grounds that the state was presenting evidence irrelevant to her guilt or innocence, and instead was showing evidence consisting of “sordid pictures and prejudicial impact.”

A pool report described jurors’ reactions to body-camera footage showing officers working on Wright, with one juror looking away and shaking her head and another with his hand over his mouth as he watched.

Prosecutor Matthew Frank pointed out that the state is seeking an aggravated sentence for Potter if she’s convicted, and to do so must show the wider impact of her actions. Judge Regina Chu quickly dismissed the motion, though she did tell prosecutors to avoid showing the jury duplicate autopsy pictures.

Potter, 49, is charged with manslaughter in the April 11 shooting of Wright, who had been pulled over in the Minneapolis suburb of Brooklyn Center for expired license tags and an air freshener hanging from his mirror. Potter, who quit the force two days after his death, has said she meant to use her Taser on Wright.

Potter is white. Wright, 20, was Black. The shooting set off days of protests and clashes with law enforcement in Brooklyn Center, just as former Minneapolis Police Officer Derek Chauvin was on trial nearby in George Floyd’s death.

Wright’s passenger was the first witness Thursday. Alayna Albrecht-Payton, who said she had begun a relationship with Wright just a few weeks before he died, described her panic when he was shot.

“I grabbed, like, whatever was in the car. I don’t remember if it was a sweater or a towel or a blanket or something … and put it on his chest like, like you know, you see in movies and TV shows,” she said. “I didn’t know what to do.” 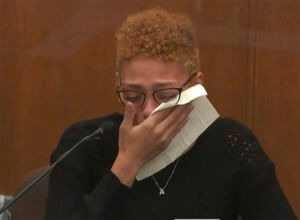 Albrecht-Payton also apologized to Katie Bryant, Wright’s mother, who had called his phone trying to re-establish contact after a call with him was cut off right before he was shot. Bryant testified tearfully a day earlier that she first saw her son’s apparently lifeless body via that video call.

“I pointed the camera on him,” Albrecht-Payton said. “And I’m so sorry I did that.”

Body-camera video showed Wright pulling away from officers as they tried to arrest him on an outstanding warrant and getting back in his car. After he was shot, the car moved away down the street, eventually crashing into another vehicle.

The collision was captured by Officer Alan Salvosa’s police car dashcam, which was behind the car when Wright’s vehicle struck it.

Salvosa’s body camera showed him calling for aid as he drew his weapon and repeatedly ordered “Put your hands up!” to the occupants of Wright’s car. The passenger — Albrecht-Payton — is heard saying “I can’t.” Salvosa testified that he couldn’t see into the rear of the car, which he knew had just left a location where officers were seeking to make an arrest.

As Salvosa waited for backup and ambulances, about 8 1/2 minutes passed from the moment of the crash before officers moved in to begin trying to help Wright. Testimony and body-camera footage showed that officers weren’t sure what they were dealing with and took time to approach the car safely. 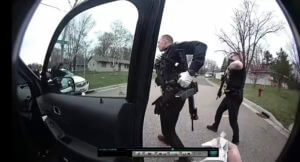 In this image taken from Brooklyn Center Police Officer Jeffrey Sommers’ police body cam video that was played during the trial of former Brooklyn Center police Officer Kim Potter on Thursday, Dec. 9, 2021, in Minneapolis, police approach the car that Daunte Wright was driving after being shot during a traffic stop.  (Court TV)

Prosecutors also called the wife and the daughter of a man who was in the car struck by Wright’s to testify about the toll the crash took on the man’s health. Denise Lundgren Wells testified that her father, Kenneth Lundgren, had health issues before the crash but that his decline accelerated afterward. He is now in his 80s and in hospice care, she testified.

Frank, the prosecutor, said the post-shooting evidence is aimed at showing that Potter’s actions created a danger to others beyond Wright — something the state will have to prove as it seeks a longer sentence for Potter than is called for under the state’s guidelines.

Chu ruled that the state must eliminate duplicate autopsy photos, and that any images of Wright with his eyes open must be blacked out above the nose.

“The jury is not supposed to be deciding this case based upon sympathy, passion or anything of that sort,” she said.

First-degree manslaughter requires prosecutors to prove Potter acted recklessly. Second-degree requires them to prove culpable negligence. Neither charge requires proof that she intended to kill. State sentencing guidelines call for just over seven years in prison on the first charge and four years on the other.