EUCLID, Ohio (AP) — A white police officer who fatally shot a Black driver during a struggle inside a car in 2017 must pay his family $4.4 million.

An Ohio jury made the award Tuesday, finding that Euclid officer Matthew Rhodes acted recklessly when he climbed into 23-year-old Luke Stewart’s car and shot him as Stewart drove away. The shooting had inflamed racial tensions in Euclid, a Cleveland suburb, and a grand jury declined to indict Rhodes after hearing evidence from prosecutors. 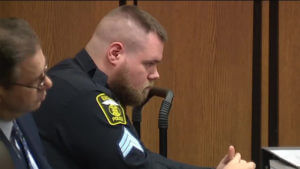 The jury’s finding stemmed from a wrongful death lawsuit filed by Stewart’s mother. The panel said Rhodes must pay Stewart’s family $3.9 million for the loss of his support and companionship and $500,000 for the pain and suffering he went through. But Rhodes will not have to pay punitive damages to the family or attorney’s fees.

The family’s attorneys told Cleveland.com that the verdict provided long-awaited accountability for what happened to Stewart. A lawyer representing Rhodes did not immediately respond to a request for comment.

Stewart’s family had filed a federal civil rights lawsuit against the city and the officer, but a trial court dismissed the case, and an appeals court agreed, saying there was no clearly established law barring the officer’s conduct. The U.S. Supreme Court declined to hear the case in a decision made in May 2021.

Stewart’s family had contended in that lawsuit that police training in the city “encouraged, or at least condoned, excessive force.” The training included the use of a sketch by comedian Chris Rock, in which he gave “tips” on how to avoid being beaten by police, and cartoons allegedly making light of police violence.