WASHINGTON (AP) — The Justice Department announced Tuesday its largest-ever financial seizure — more than $3.6 billion — and the arrests of a New York couple accused of conspiring to launder billions of dollars in cryptocurrency stolen from the 2016 hack of a virtual currency exchange.

Federal law enforcement officials said the recovered sum was linked to the hack of Bitfinex, a virtual currency exchange whose systems were breached by hackers nearly six years ago.

Ilya “Dutch” Lichtenstein, a 34-year-old citizen of Russia and the United States, and his wife, Heather Morgan, 31, were arrested in Manhattan on Tuesday morning, accused of relying on various sophisticated techniques to launder the stolen cryptocurrency and to conceal the transactions. They face federal charges of conspiracy to commit money laundering and conspiracy to defraud the United States. 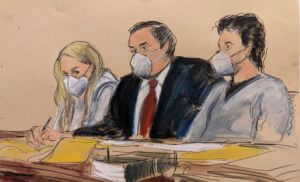 In this courtroom sketch, attorney Sam Enzer, center, sits between Heather Morgan, left, and her husband, Ilya “Dutch” Lichtenstein, in federal court, Tuesday, Feb. 8, 2022, in New York. The couple are accused of conspiring to launder billions of dollars in cryptocurrency stolen from the 2016 hack of a virtual currency exchange. (AP Photo/Elizabeth Williams)

“The message to criminals is clear: Cryptocurrency is not a safe haven. We can and we will follow the money, no matter what form it takes,” Deputy Attorney General Lisa Monaco said in a video statement released by the Justice Department.

At an initial court appearance, a magistrate judge ruled Lichtenstein could be released into home detention on a $5 million bond co-signed by his parents; the bond amount for Morgan was set at $3 million. They were to remain in custody until the bail conditions were met.

Prosecutors had argued defendants should be denied bail, calling them flight risks who still potentially have access to vast sums of money. In addition, during a search of their home, investigators found a folder labeled “passport ideas” that contained information on how to get fake IDs, along with a stash of burner phones, the prosecutors said.

Defense attorney Anirudh Bansal countered by telling the judge his clients had no intention of fleeing. He said they had known they were under investigation since late last year, “and still they sat tight.” He also called the charges “thin” and overblown.

“I don’t think you’ll find that billions of dollars have been laundered,” Bansal said.

The couple was not charged in the Bitfinex hack itself, during which a hacker initiated more than 2,000 unauthorized bitcoin transactions that sent stolen funds to a digital wallet under Lichtenstein’s control. About $71 million in bitcoin — valued today at more than $4.5 billion — was stolen, prosecutors say. 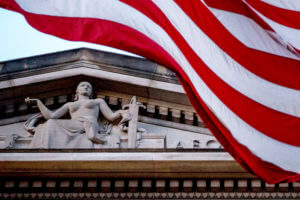 FILE – An American flag flies outside the Department of Justice in Washington, March 22, 2019. The Justice Department has announced its largest-ever financial seizure — more than $3.5 billion — and the arrests of a New York couple accused of conspiring to launder billions of dollars in cryptocurrency. It says the cryptocurrency was stolen from the 2016 hack of a virtual currency exchange. Law enforcement officials on Tuesday revealed the Justice Department has seized roughly $3.6 billion in cryptocurrency linked to the hack of Bitfinex, a virtual currency exchange whose systems were breached nearly six years ago. (AP Photo/Andrew Harnik, File)

Authorities say they ultimately traced the stolen funds to more than a dozen accounts that were controlled by Lichtenstein, Morgan and their businesses. Court documents accuse them of relying on classic money-laundering techniques to hide their activities and the movement of the money, such as setting up accounts with fictitious names and using computer programs to automate transactions.

They also relied on AlphaBay, a dark web criminal marketplace that was dismantled by the Justice Department in 2017, as an opportunity to conceal their transactions and make them harder to trace, prosecutors said.

Millions of dollars of the transactions were cashed out through bitcoin ATMs and used to purchase gold and non-fungible tokens as well as more mundane items like Walmart gift cards for personal expenses, prosecutors said.

“Today’s arrests, and the Department’s largest financial seizure ever, show that cryptocurrency is not a safe haven for criminals,” Monaco said in a statement. “In a futile effort to maintain digital anonymity, the defendants laundered stolen funds through a labyrinth of cryptocurrency transactions. Thanks to the meticulous work of law enforcement, the department once again showed how it can and will follow the money, no matter the form it takes.”