The Defense Ministry said the former member of the boy band Big Bang was also fined 1.15 billion won ($989,000). He was taken into custody after the ruling by an army court in Yongin, near Seoul. 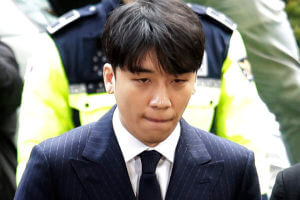 Seungri, whose real name is Lee Seung-hyun, was indicted in January 2020 on multiple charges, including arranging illegal sexual services for business investors from Taiwan, Japan and Hong Kong from 2015 to 2016. He was also convicted of embezzling funds from a Seoul nightclub he ran and violating laws prohibiting overseas gambling by betting heavily at foreign casinos from 2013 to 2017. He denied most of the charges.

His case was transferred to a military court after he enlisted in the army in March last year for 21 months of military service, a requirement for most able-bodied men in South Korea because of the threat from rival North Korea.

Yonhap news agency reported that Seungri appeared in court in a combat uniform and shook his head repeatedly as the judge announced the verdict.

Before his fall from grace, Seungri was one of the biggest stars in K-pop because of the success of Big Bang, which attracted huge followings in Asia and other parts of the world after its debut in 2006. Forbes magazine reported in 2016 that the group had made $44 million in pretax earnings the previous year.

Seungri left the group in 2019 after the media reported the prostitution accusations. His case is one of several scandals that have roiled South Korea’s entertainment industry in recent years.

In 2019, singer Jung Joon-young received a six-year prison term and former boy band member Choi Jong-hoon a five-year term after they were found guilty of illicit sexual relations with a woman who was unable to resist.